World War I is the first global conflict that is globally acknowledged as a form of total war - one in which everyone’s a target, any weapon is permitted, and the scope of the battlefield is unlimited. We’ll see a lot of historical firsts in WWI in terms of conducting war from the amount of devastation to the types of military technology used.

As you remember from Section 7.2, Germany is at war with Russia and France, as well as their allies. Unfortunately, this leaves Germany at a tough spot because it is flanked by France on its west and Russia on its east. Knowing this, experts crafted what is known as the two-pronged Schlieffen Plan: defeat France first and then invade the still-industrializing Russia given the latter’s delay in mobilizing all its forces.

The plan completely fell through as the Germans underestimated the might of the French. By the time Russia was able to consolidate and deploy its troops, Germany still hadn't defeated France. As a result, Germany had to fight on two fronts: the Western Front and the Eastern Front. 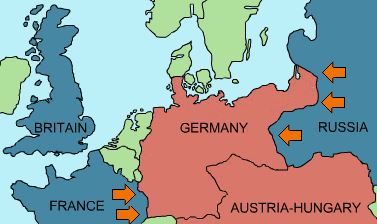 Who won between Spanish conquistadors and Native American tribes? Who won between European colonizers and African societies during the Scramble for Africa? It is common knowledge that whoever has the best technology won. With the world still recoiling after the explosion of industrialization less than a century ago, nations focused on developing better weapons than existing ones as they hoped to swiftly close the war and reduce human and economic losses.

Modern warfare isn’t just about brute force as it also has a strategic element that closes the gap between a 100,000-men strong battalion and a 1,000-men strong regiment. Underground trench systems were established by both sides along the eastern and western fronts to protect troops from artillery and gunfire from above the ground, which in turn created “no-man’s lands.” These refers to the areas between trenches because of those going into them having near-zero chances of survival due to the possibility of being mortally wounded or killed by either ally or foe.

Some new (deadly) weapons we see in this war:

When a country is at war, its economy shifts towards one heavily focusing on the production of weapons, ammunition, and aid packages alongside more supplies that’ll aid troops abroad. The Home Front refers to everything the government does to support the nation’s cause in war. People ration their supplies. Governments created production quotas. Women worked in place of men in factories and industries. Dissent was crushed through censorship and strict punishments.

To encourage intense and fervent nationalism while avoiding opposition that could hinder war efforts, governments resort to political propaganda, any art or media that promotes local support against a cause or enemy being degraded in such works. When we hear the word “propaganda” today, people often connect it to something negative: manipulation, lying, misinformation. Why is that so? Throughout any modern conflict, propagandas are not necessarily accurate. Instead, it imparts a political message that clearly defines who’s the good and bad guys and calls for the people to help the good guys win at war.

Notice how the poster above looks down on the Central Powers as an ape instead of humans and is clutching Lady Liberty in its arms, a potential representation of the endangerment of American ideals. Each country has its own cast of goodies and baddies in its propaganda posters and artwork. This one motivates the people (its audience) to step up and join the war effort by working at factories and sending supplies to vanquish the “apes” once and for all. Interestingly, the United States produced higher numbers of propaganda posters during WWI more than any other belligerent. When analyzing propaganda posters for any part of the AP exam, think of what they portray, how they portray something, the audience of the works, and the overarching purpose of whoever made them. Sound familiar? It’s pretty similar to the HIPP analysis strategy for the DBQ!

Propaganda, Propaganda... Identify the (1) author (country), (2) content, (3) audience, and (3) the underlying message of the propaganda poster below. 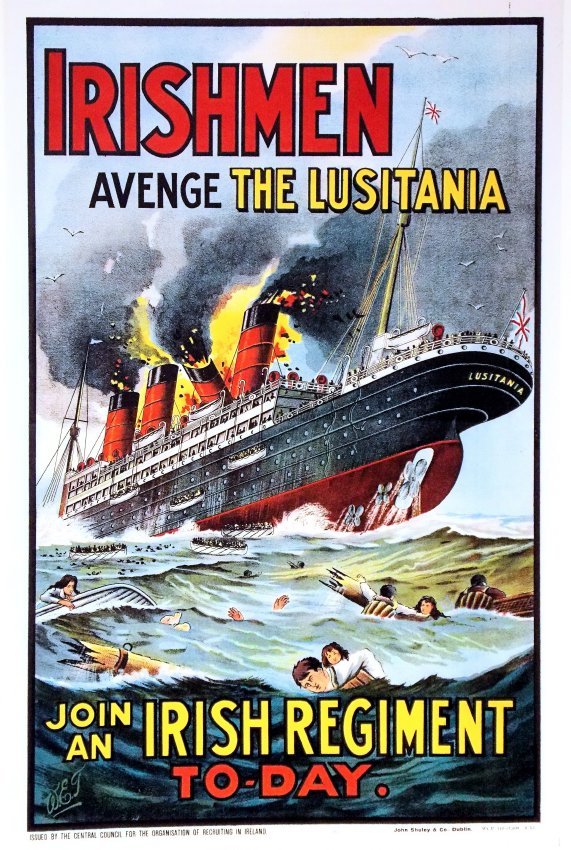