South Asia is the region below the Hindu Kush mountains and Himalayas. This region, dominated by the modern-state of India, claims one of the world’s oldest faiths and a tradition of regional trade.

Southeast Asia consists of modern nations like Vietnam, Thailand, and Cambodia. This region has developed within a mountainous and jungle environment, making a large empire impossible. The people of Southeast Asia have been heavily influenced by China to the north and the trade with the west within the Indian Ocean Trade Network. 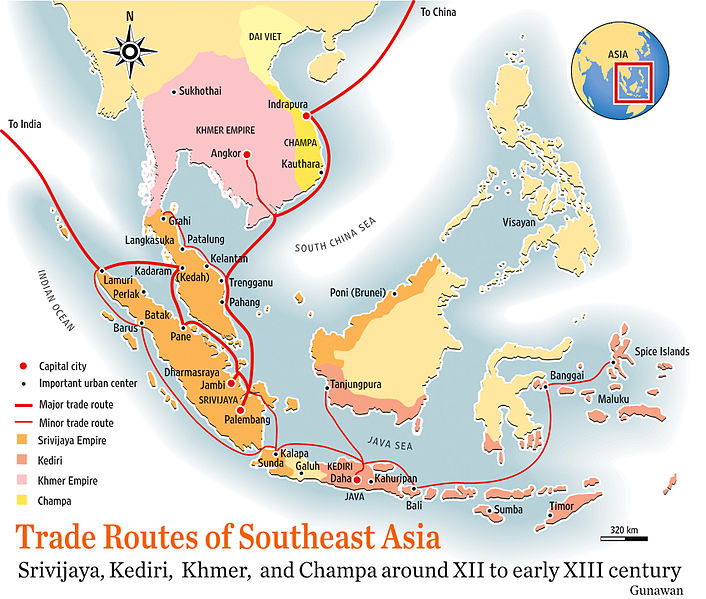 Before the modern-states of Southeast Asia, there were various empires, both land-based and sea-based, that helped unite the people politically, economically, and religiously.

The Khmer Empire was a powerful state in Southeast Asia, formed by people of the same name, lasting from 802 CE to 1431 CE. At its peak, the land-based empire covered much of what today is Cambodia, Thailand, Laos, and southern Vietnam. Its capital, Angkor Wat, was originally a Hindu temple, developed over time into a vast Buddhist temple.

The Srivijaya Empire was a Indonesian Hindu empire based on the island of Sumatra, Indonesia, which influenced much of Southeast Asia. Srivijaya was an important center for trade between China and India as well as for the expansion of Buddhism from the 8th to the 12th century.

The Majapahit Kingdom was a smaller Javan Buddhist kingdom that controlled the shipping lane leading to and from the Strait of Malacca.

Southeast Asia benefited economically from the Indian Ocean Trade Network, while it also became very diverse.  Islamic merchants and Sufi (mystical sect of Sunni Muslims) missionaries brought their faith to Indonesia, making it the most populated Islamic nation in the world today.  This trade network and the missionaries traveling with it is one of the most important factors in the spread of Islam in Southeast Asia.