The trans-Saharan trade route transformed West Africa by connecting it to the larger parts of the world. This trade route in particular was intriguing as it required the need for human adaptation and innovation over this vast desert area.

This trade route is often overlooked but it’s actually super cool! It has all the components of a good trade network: the formation of diasporic communities, new technology, the spread of religion (Islamic traditions) and even a super rich king by the name of Mansa Musa. 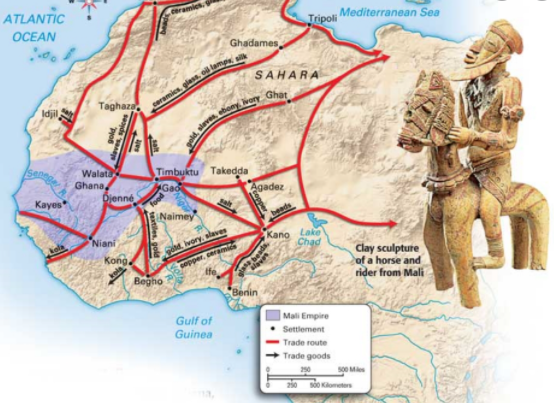 Image Courtesy of Hardy-Leah B, thinglink

How did it all start?

As always, technology helped spur this trade networks. The two big ones here are camel saddles and caravans. Camel saddles helped traders (mostly Berber nomads) ride the camels (the only pack animals equipped to survive in the desert without water for long periods of time) without injury, so it was easy to carry goods faster. Caravans were groups of traders traveling together, which often protected them from desert raiders.

These technologies made this route far safer and easier to travel, and thus trans-Saharan trade flourished, carrying salt, gold, slaves, and cowrie shells, the last of which were used as currency.

Expansion of Empires and Ideas along this route

The biggest religion that spread across this trade route was Islam. Over time, if African states weren’t already taken over by the Islamic caliphate, they may have converted voluntarily, with much help from the Arab Berber traders, many of whom were already converted to Islam.

Additionally, empires with valued goods expanded rapidly during this flourishing of the trade route, such as the Mali, Ghana, and Songhai empires.

Mali in West Africa in particular became one of the richest empires in the region due to its large supply in gold-- so rich, in fact, that when their king Mansa Musa made his pilgrimage (hajj) to Mecca every place he stopped along the way became so flooded with gold that their economies inflated drastically. That’s how rich this guy was-- he could literally give out so much gold that it could crash an entire city’s economy.