One notable feature about these empires is that a number of them were the catalyst, if not outright cause, of several new or modified religious movements. These changes were sometimes used or supported by rulers, often to enhance their prestige.

In Europe, the newly created Protestant movement within Christianity, which opposed the Catholic Church in Rome, found strong supporters in Northern Europe and in parts of France. Rulers such as Henry IV in France or Albert Duke of Prussia promoted or tolerated Protestant ideas that might have otherwise been crushed by the Catholic Counter Reformation and Inquisition, which received support from Catholic monarchs. But like their Catholic counterparts, Protestant monarchs used the newly formed Protestant churches to break away from the church in Rome and seize its property. 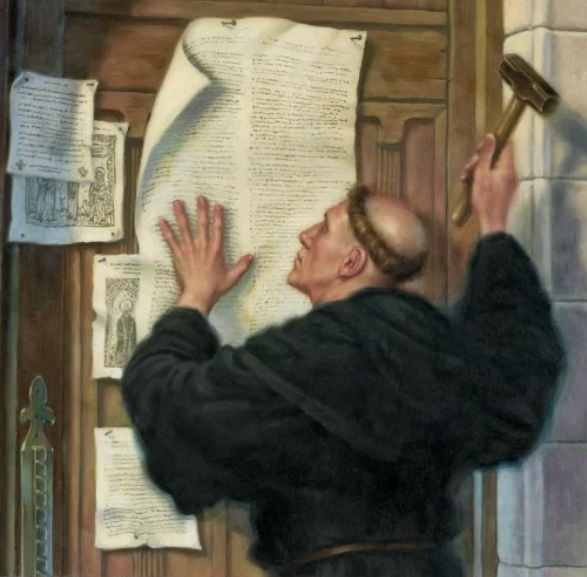 Martin Luther and reformers in other parts of the world often contested the authority of existing religious structures and sometimes sought to build new religious orders. Empires tried to use religion to reinforce authority, but this did not always go smoothly. Image Courtesy of thegospelcoalitio

In South Asia, the Mughal Empire represented a much deeper connection between Islam and Hinduism than had previously existed. True, Muslims had been in South Asia since the beginning of Islam, but now a Muslim power controlled almost the entire continent. These deeper interactions between the ruling faith and the majority faith led to, and were a result of, popular religious movements such as Sufism and the Bhakti Movement.

(A note: historians and the AP World Exam use the term syncretic to describe Sikhism as a combination of Islam and Hinduism. However, many Sikhs do not describe their religion as only syncretic; and, all religions are syncretic in some ways)

In the broader Islamic World, the political competition between the Ottomans and Safavids over territory and trade intensified the division between Sunni and Shia Muslims. The Sunni-Shia split occurred around 700 CE, long before either empire, but the conflict between them intensified, especially considering the Ottoman Sultan claimed the title of Caliph, leader of the Muslim world, and the Safavid Shahs also claimed divine connection via the Imams (leaders) of the Shia community.

In the Americas, both the Aztec and Inca Empires continued earlier religious traditions that had developed in those regions. The Aztec religious pantheon included several Mayan deities and the Aztecs used the Mayan script as well. The Incas continued the religious practices of the Moche who came before them (and the Chavin before them influenced the Moche), specifically that of worshipping the sun and moon, though in the Moche tradition the moon was more powerful. Both the Aztecs and Incas practiced human sacrifice, as did almost every Pre-1492 American Culture before them, though the Aztecs in particular practiced it to a much greater degree.