It’s important to define the different environmental impacts that trade networks had on various societies. Along with goods and beliefs, diseases and crops spread along these routes too-- some of which would alter the way the world worked forever.

Okay, this is the big one. The Bubonic Plague was one of the most feared diseases of the 14th century. This gruesome disease spread through infected rats that came off ships when they docked. The name Black Death, came from the swollen glands in a person’s neck, armpits and thighs that turned black.

The Plague started in China around the 1300's, then swept into Europe, via trade routes, causing the decimation of up to half their population. None of that would have been possible without trade routes. It’s also important to note that the Mongols used biological warfare as a means to spread the plague to Europe-- to conquer neighboring territories, Mongols would often load infected people into catapults and launch them over walls. The resulting spread of disease would kill the people inside, weakening the city and allowing the Mongols to take over far more efficiently. Brutal? Absolutely. But it was effective. 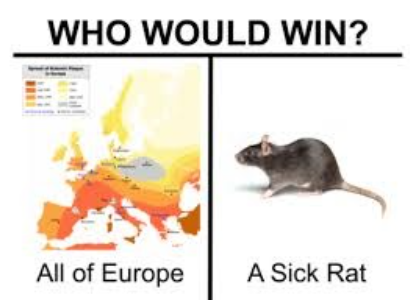 Many crops diffused throughout these roads as well, but the College Board only requires you to know three: bananas, new rice varieties (champa rice), and citrus. Let’s go through them!

Bananas originated in Pacific region and Southeast Asia, and from there, Arab traders utilized the Indian Ocean trade network to bring them everywhere, especially in Africa, where cultivating them became lucrative.

New rice varieties, specifically champa rice, spread first from Southeast Asia to China, since Vietnam was under Chinese control through the tribute system. Vietnam gave China champa rice, which was drought-resistant and early-ripening. It was the perfect rice to grow, since it produced more of the crop, in a much faster amount of time. China quickly adopted it, and champa rice became a staple of the Chinese diet.

Citrus originated in Southeast Asia, similar to bananas, and through the Indian Ocean and Silk Road trade networks to the Mediterranean.