The Silk Roads were the biggest land network in the time period, stretching from Constantinople all the way to the very eastern edge of China (Hangzhou). Needless to say, they were a pretty big deal in Afro-Eurasia. So let’s get into it!

How did the Silk Roads form?

Great question! In a nutshell, it was the growth of empires and development of new technology.

In a little bit longer of a nutshell, empires were rapidly expanding (such as Song China), and with a growing empire came a growing desire for goods. But although these economies were expanding as fast as they could, sometimes they couldn’t provide everything. The rich especially wanted goods that the empires often couldn’t afford. This is the main reason why most trade routes at the time (but the Silk Roads in particular), traded mostly luxury goods, such as sugar, gold, porcelain, and silk (duh!)

But how to make all of this happen? Profit-seeking merchants began to build off of old trade technology to make it work for this much bigger trade network. Some key examples are caravanserai, roadside inns along trade routes merchants could rest in, bills of exchange, which were essentially early IOUs similar to paper money (convenient because they were much lighter than the gold used as currency), and banking houses, which would issue bills of exchange.

Effects of the Silk Roads

As you can imagine, such a massive trade network would lead to some massive effects. Trading cities such as Kashgar and Samarkand grew massively as merchants began to exchange their goods from all over the world. Additionally, the economies of the countries trading expanded as demand for their goods increased. 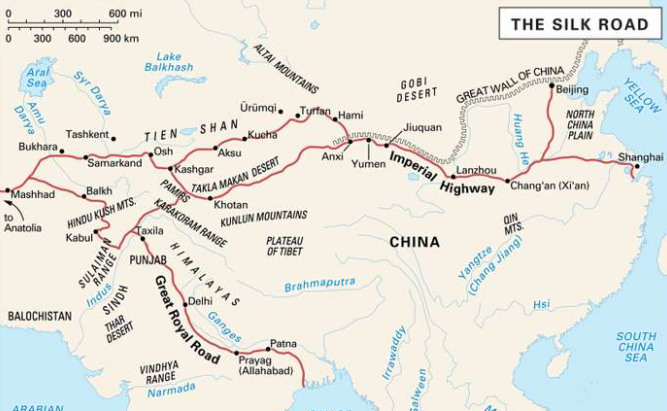 Map of the Silk Road (can you find Kashgar and Samarkand?)

Textile production dramatically increased across Eurasia as well as steel in China. The Song Dynasty in China, in particular, rapidly expanded as demand for their silk grew, and they began to rely on peasant and artisanal labor to fuel their commercializing economy.

Additionally, the ideas of the merchants carrying the goods would travel along the roads.  Religions like Christianity, Buddhism, Islam, Hinduism, and even traditional Chinese customs spread via the trade routes, along with goods such as Champa rice (a specific kind of rice resistant to drought).

With such simple ways to travel now, common people were more free to travel the world and share their observations through writing, such as Marco Polo, who traveled the Silk Roads and wrote about it. But more on him in 2.5!

Diseases, too, spread along trade routes. You know the Black Plague, which is famous for having killed at least ⅓ of Europe? Yeah. That started in China. Now I wonder how it got all the way to Europe…

Events that occurred along the Silk Roads