Personally, topics like this are my favorite part of history. You get to see the real cultural impact of much bigger concepts like trade routes or economies-- how it affects everyday people. As you can imagine, these massive trade networks (the Silk Roads, Indian Ocean, and trans-Saharan)  grew rapidly, but it wasn’t just goods that were traded along those routes. Something much bigger-- ideas-- traveled across countries.

Due to trade with China and India, Japan adopted a version of Buddhism (called Zen Buddhism) that blended their traditional Shinto traditions with Buddhist ones.

Buddhism was often spread by travelers, especially Xuanzang, a Buddhist Chinese monk that was living proof of Buddhism’s spread into East Asia. Along with being a storied traveler who wrote down his observations, Xuanzang helped spread Buddhism wherever he went (sort of similar to Paul who spread Christianity throughout Europe).

Additionally, in China during this period, Neo-Confucianism began to rise in response to Buddhism. Buddhism had gotten pretty powerful in China (specifically in the Tang Dynasty), and Confucianists wanted to put Confucianism back into power. So they adapted Confucianism to take on a few Buddhist characteristics. Voila! Neo-Confucianism was all the rage in China. This just goes to show how a religion not native to China could spread and take such a powerful hold.

Hinduism, too, continued to travel throughout Southeastern Asia. A perfect example of this is Angkor Wat in what is now Cambodia. Angkor Wat is a famous beautiful Hindu temple (if you haven’t looked it up, I encourage you to do it now)! But Hinduism certainly didn’t begin in Cambodia-- it started in India. How did it get there, you ask? Simple. Look at Cambodia on a map. It’s well within the Indian Ocean trade network. 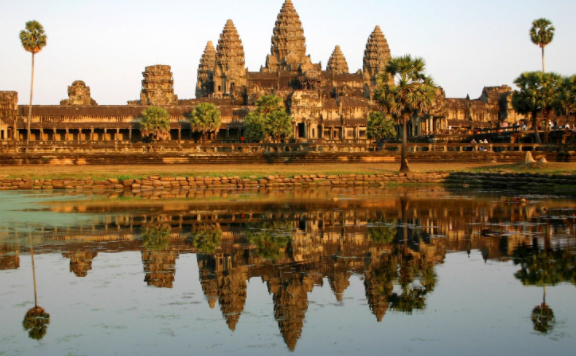 Islam also continued to spread in sub-Saharan Africa and Asia. Muhammad himself was a trader, so unlike many other empires at the time, trade in the Islamic caliphate was widely encouraged. As a result, Islam began to spread very rapidly. In Africa, beautiful mosques made of adobe, such as the Great Mosque of Djenne appeared, and Islam became quite powerful in many states (see Mansa Musa).

Religion and tradition wasn’t the only thing that was unintentionally traded, though-- technology spread, too. The two biggest were from China: papermaking and gunpowder. Both of these were obviously huge, but in very different ways.

Papermaking, of course, was incredibly convenient since paper was much lighter and easy to make-- and most importantly, cheaper. Paper money, especially, helped encourage increased trade along the various routes.

Gunpowder also had huge effects, but much more detrimental. It was originally made by a pacifist Daoist attempting to make fireworks, and from there, it was a bit of an explosion (pun absolutely intended). People very quickly realized that this could be used to reinvent weaponry, and it all went down from there. Before long, Chinese were developing guns and using them to wage war, followed very quickly by Europe.

Not just traders traveled these routes-- travelers did, too! As trade routes got bigger, it became safer and easier for the average person to see the world and report back. There are three you’re going to need to know: Ibn Battuta, Marco Polo, and Margery Kempe.

Let’s start with Ibn Battuta. This guy was a Muslim Berber from Morocco, and during his years of travel, he traveled seventy-five thousand miles. Crazy, right? But I swear it’s true. This guy went everywhere, from Spain as far east as the very eastern corners of China. Since he was Muslim, a lot of his writings are comparing the different versions of Islam that popped up around the world. Super cool! Most of his works are published in The Travels of Ibn Battuta.

Next we have the most famous one, Marco Polo. You probably know a good bit about this guy: Venetian, traveled Europe, went to China (when the Mongols were in power), came back, wrote about it in The Travels of Marco Polo. He mainly used the Silk Roads to travel, different from Battuta, who used primarily the Indian Ocean. 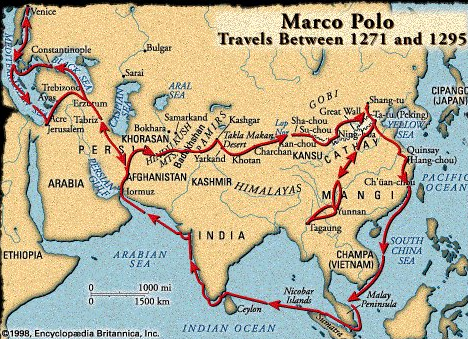 I’ve saved the best for last: Margery Kempe. Born in England during the Dark Ages, she was a religious mystic and traveled all of Europe, completing pilgrimages to holy places such as Jerusalem and Rome. Her book (which she dictated, since she was illiterate) is called The Book of Margery Kempe and is considered the first-ever English-language autobiography in history!