After the fall of Rome, Europe, specifically Western Europe, was dominated by smaller kingdoms and regional powers. Between 1200 and 1450, many of the modern states today were formed as powerful kingdoms replaced localism.

In places like France and England, the people were feudal. Feudalism is a political, economic, and social hierarchy which helped organize land, work, and people's roles.

At the top is the monarch, often a king. He basically “owned” all of the land and would grant land, called fiefs, to elites called lords. The lords would then grant some of their own land to other individuals. Those who were granted land were called vassals. Vassals owed food, labor, and military service to the lords above them. Many kings and lords, as well as the church, would hire knights to protect their wealth and power.

Land was sometimes worked on by those who were not the lords to others. These serfs were not slaves but owned no land, thus were very tied to the lord who granted them permission to work the land. Serfs and the manors they worked on would practice the three-field system, where the farmers were careful to not overuse the soil by rotating wheat, beans, and/or let land lay fallow (unused) during the harvest. 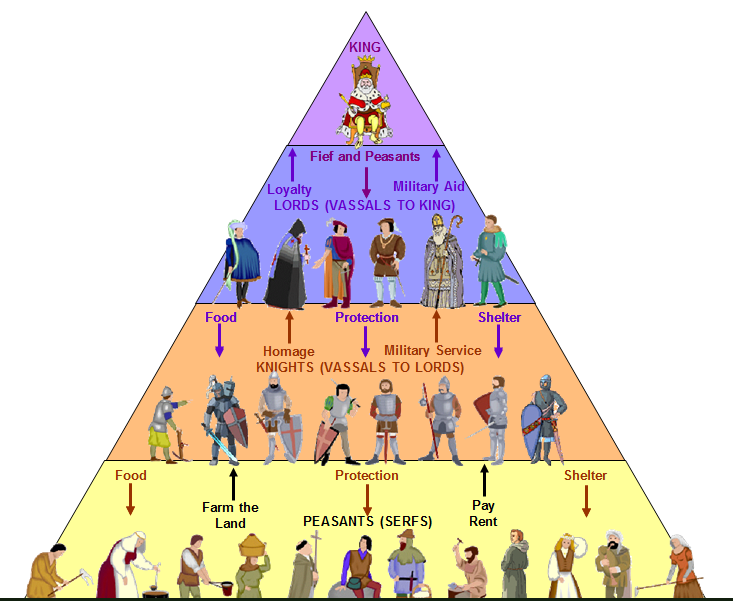 Between 1200 and 1450, regional kingdoms of France, England, and the Holy Roman Empire became solidified. In the beginning, each power was tied to the Catholic Church and feudal. However, over time, the Catholic Church began to lose influence leading to the Reformation of the 1500s. Feudalism also weakened as monarchs like King Philip II of France created a larger bureaucracy that worked with a legislative body called the Estates-General.

The Holy Roman Empire laid where modern day Germany is today. Unlike France, regional kingdoms with powerful princes and the church had a lot of power versus the central government. The Concordat of Worms (Worms is a German city) allowed the Pope of the Catholic Church to appoint bishops in HRE but gave the king the ability to veto those choices.

Unlike France, English kings were being checked by the nobility. King John was forced to sign the Magna Carta, giving the people more rights in trials and taxation. The English Parliament will eventually form to be a strong legislative body.  Over time, the competition for trade, land, and resources led the English and French to war. The Hundred Years War is an example of this type of conflict. Conflicts like this created a new spirit of nationalism and an end to feudalism.

This era saw a lot of religious tension in Europe. The predominantly Christian Europe saw the spread of Islam up the Iberian peninsula as a threat. Charles The Hammer Martel stopped its advance at the Battle of Tours in southern France. By 1492, the Catholic Church had expelled the Muslims from Spain in the Reconquista.

The Catholic Church started the Crusades in order to take the Holy Land back from the Muslims. The series of Crusades saw the Crusaders also attacking the Orthodox Christians in Constantinople. In the end, the Crusades failed to win back Jerusalem, rather it just weakened the Catholic Church and increased the power of regional monarchs. However, this cross-cultural contact did slowly awaken Europe to the science and mathematics that the Islamic world had been developing.

By 1450, Europe saw an increase in literacy, urbanization, and connection to the global community. At one time, the only literate people of Europe were monks and other men tied to the Catholic Church. Gutenberg’s printing press will change this. At one time, Europe was closed from trade with the rest of the world. The Crusades and Mediterranean trade will end this. This will see the beginning of the Renaissance.

The Renaissance, or “rebirth”, was a period of European cultural, artistic, political and economic activity following the Middle Ages. Generally described as taking place from the 1300s through the 1600s, the Renaissance promoted the rediscovery of classical philosophy, literature and art. Some of the greatest authors, scientists and artists in human history thrived during this era, while global exploration opened up new lands and cultures to European commerce.