The purpose of this study guide is to examine each of the above reasoning skills in a bit more detail.  So, let’s get to it!

🔗Causes and Effects of a specific historical development or process

In terms of causation reasoning skills, this is what we might call the “base level” skill.  That doesn’t necessarily mean that it is easy, but that this is the first level of understanding causation.

For example, if you are asked to find a cause of World War I, you couldn’t just say relationships between countries - that is too vague.  In all honesty, anybody could say this about any war, and it would be true. This doesn’t show that you know the specific causes of World War I.

💭Practice:  See if you can find the causes and/or effects of ONE of the following events or processes

❗TIP:  To help you identify causes and effects, it’s really beneficial to use some type of graphic organizer that will help you organize your information.  The easiest one to use, and one of the most effective, for causation is a simple C/E chart 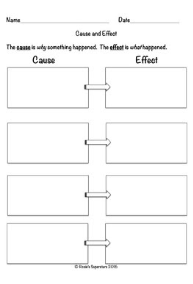 When looking at the relationship between causes and effects of a specific historical event or process, College Board wants you to go beyond simply identifying a cause and/or effect.  It wants you to be able to EXPLAIN the “why” behind the cause or effect.

Simply put, it’s the next step in the causation process.  First you have to identify the cause and/or effect, and now College Board wants you to explain WHY something is a cause of the event/process, and/or WHY the given effect happened.

So, it’s 11:30 on a Thursday night, and your curfew was at 11:00.  You knew you had to be home at 11:00, but you were hanging out at the coffee shop with your friends, and simply lost track of time.  When you walked in the door to your dwelling at 11:30, your parents were standing right there, and within 2 minutes they had taken your cell phone and grounded you for a week.

In this case, breaking curfew was the event.  The cause - losing track of time. The effects - losing your phone and being grounded for a week

Now that we have identified the cause and effects, we have to explain the “WHY” or the “HOW”

See how the causes and effects are related? And that you’ve done more than just identify the cause and effects - you’ve EXPLAINED the why behind both.

Ooooh, now we are getting into the nitty-gritty of the causation reasoning skill. So far, we have learned how to:

The principal, the main cause of an event or process

A less important cause of an event or process

An effect that happens a short-time after the event/process

💭Practice:  Let’s take a look at World War I and see if we can identify both primary and secondary causes, and short-term vs. long-term effects

In the above example, the primary cause of World War I was the assassination of the Archduke. His murder caused Austria-Hungary to declare war on Serbia, and from there, the rest of Europe exploded into war

For the short-term effect, the collapse of the Ottoman Empire happened in 1922. World War I had weakened the empire to such an extent, that it simply couldn’t recover.  As well, the division of Ottoman territory among the victors ensured its collapse

The rise of Hitler and the Nazis was a long-term effect of World War I because it happened nearly a decade after the end of the war. And, it was the Treaty of Versailles, that came out of World War I, and the conditions placed upon Germany, that allowed a leader like Hitler to gain the support and backing of the German people.

Does this make sense? Want to take a shot at applying this skill?  (Get it? Shot? Like the archduke got shot? 😂)

The Historical Significance of Different Causes and/or Effects

And here we are, the final step in the causation thinking skill process, at least for AP World History.

You will often hear, or be asked, about why certain events or people or causes/effects are historically significant.  Well, to be able to answer that, you have to know what historical significance means

Historical Significance, to College Board, means “why should we care” or why is this important, or noteworthy, in history.

For you, this means you will have to be able to explain, usually through discussions or essays, why the causes, or effects, of a specific historical event or process matter.  Why are they important to know? How will they impact future history?

Well, let’s answer that, in a variety of ways.  That is what’s so cool about historical significance - there usually isn’t just ONE simple answer

So that’s it for the Causation historical thinking skill in AP World History. Hopefully you have found this guide informative and it hasn’t “caused” you any anxiety (do you find that punny?!). Thank you for taking the time to read this, and good luck on the exam!