Practically in ruins due to WWII, Europe was struggling to recover. Entire economies were crippled, not just for the losers of the war. Only two countries could provide the aid needed to recover. The results of their differing economic aid policies would set a precedent for what was to come later on during the Cold War.

The US is Here to Help!

Partially worried about the rise of communism in Europe and the economic status of Europe, the US proposed the Marshall Plan. Approved by Congress, America offered $13 billion in aid to all of Europe on the sole condition that they work together for mutual benefit.
The money loaned by America stimulated the reconstruction and massive economic growth of a torn post-war Europe. Considered an “economic miracle” and highlighting the importance of consumerism in the modern world (Western and Central Europe, as well as America), the West flourished immensely. America got the trade it desired from Europe AND Central and Western Europe got the funds they need to rebuild themselves! Win-win, right? 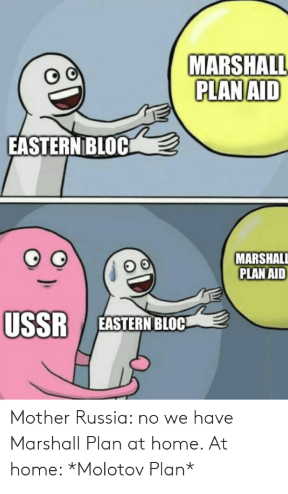 Keep That Money to Yourself

The USSR was not pleased with the US’s involvement in European affairs, to say the least. Most of Eastern Europe, under the influence and control of the USSR (satellite nations), refused the aid of the United States. This denial of aid would cause further tension between the two countries.
As an alternative, the Soviet Union came up with the Molotov Plan in 1947. All nations under the influence of the USSR or allied with them were offered financial aid. It resembled the Marshall Plan but only for Eastern Europe . This policy did not bring about the same success that the Marshall Plan did, and Eastern Europe would lag far, farther behind Western and Central Europe as a result.
This would be the first of many ideological conflicts, economic and political, between the two nations.
The scoreboard? Capitalism: 1. Communism: 0.