There was a long standing history of anti-Semitism in Europe. Early on, Jews were blamed by Christians for the death of Jesus, although they did not kill him. Jews were also excluded, tortured, and exiled by many European countries in the Medieval period, as well as through the Protestant Reformation. However, the rise of nationalism saw a resurgence in anti-Semitism, as no European country identified with a Jewish heritage.

Many European countries began actively excluding races, ethnicities, religions, and cultures that were not their own to create a more refined nation with consistent values, histories, languages, and customs.

In Germany, the Nuremberg Laws were passed in 1935 that defined a Jewish person as anyone with 3-4 Jewish grandparents, regardless of whether they identified personally as Jewish. They also limited Jews from marrying or having children with Germans, forced them to seek permission to marry other Jews, and eventually prohibited marriage altogether. Jewish people were also forced to register their identity as Jewish and wear a gold Star of David visible on their clothing.

Jewish people in Germany were removed from cities, and most were deported to Poland where over a thousand ghettos were set up to remove Jewish people from German societies. These ghettos were extremely cramped, dirty, and were breeding grounds for disease. Many died with no medical attention, were shot by Nazi soldiers, or were sent to German death and concentration camps. Ghettos were meant to be temporary until the Jews inside could be sent to other camps. 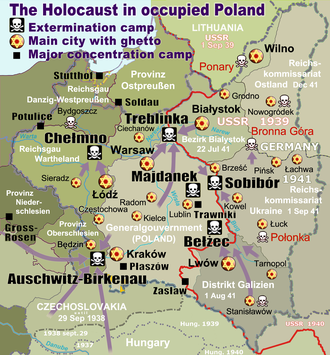 To avoid being accused of war crimes, many camps were liberated in the early months of 1944, as Allied forces moved into Poland. Allied forces approached many camps that had no guards and found sick, starving, and dead prisoners. In some instances, the Nazis took prisoners from the camps on Death Marches to leave the camp, but still continue carrying out the Final Solution.

Liberation helped the Allies to understand the scope of violence in Germany, Poland, and other occupied areas during the war. Many had no idea these atrocities were happening. Even after liberation, Jews had a long road to recovery. Their malnourished bodies were still highly prone to disease. Just about everyone had to cope with the loss of family members, possibly entire families. Others, who had sent their children away, began the search for them. Some never succeeded. The psychological weight was heavy, and to some unbearable.