Unification was a well-recognized idea in Italy. It had long been supported by romantic nationalists like Giusseppe Mazzini. He began a group called Young Italy, mostly focusing on the future generations of Italy, to encourage them to unify.

The major steps to unification include:

In Italy, this was Piedmont-Sardinia under the leadership of King Victor Emmanuel II and his Prime Minister, Count Camillo Cavour. Cavour will orchestrate strategic alliances and manipulate events in Italy to organize the unification movement.

2. The removal of foreign influence.

In Italy, foreign influence mostly consisted of Spain in Naples and Sicily, France had influence in Genoa, Alsace, and Lorraine, and Austria in Lombardy and Venetia. Giusseppe Garibaldi was a liberal nationalist that organized an untrained military called the Red Shirts. With nearly a thousand men, they removed the Spanish Bourbons from Sicily and Naples. Cavour allied with the French to drive Austria from Lombardy.

In the meantime, Cavour and King Victor Emmanuel II allowed the Italian provinces to vote for unification. With their only other options being controlled by foreign powers, many voted to support a unified Italy.

The final two provinces were Rome and Venetia. After the Austro-Prussian war for German unification, Italy was rewarded for not helping the Austrians and they finally took Venice.  Rome was protected by French troops until the Franco-Prussian War for German Independence. France removed their protective force to fight against Germany, and lost. Cavour took this opportunity to take Rome.

German Unification was the sole goal of Prussia’s Chancellor, Otto von Bismarck. The Zollverein, the economic unity of the German states, inspired the idea of nationalism in the German states. Bismarck used the nationalist movement to increase Prussia’s power and began working to eliminate foreign influence, much like the process for unification in Italy. 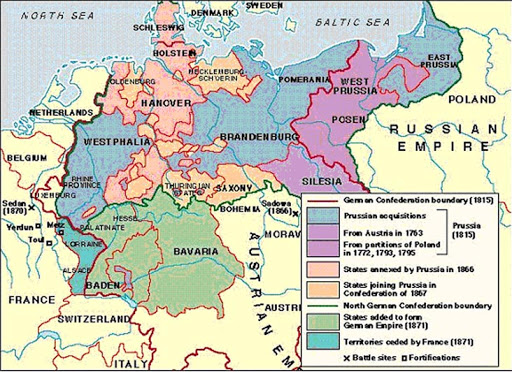 France was forced to sign a resolution recognizing Germany as a legitimate country at the Hall of Mirrors in the Palace of Versailles- embarrassing. They also were forced to pay reparations to the Germans as well as cede territory. The French will carry this tension through colonial conflicts with Germany, and into WWI.

Austria dealt with internal tensions between different nationalities represented in the Empire- mostly the Hungarians. They solved these tensions by recognizing the downfall of their empire and signing the Compromise of 1867 with the Hungarians to create a dual monarchy.

The Crimean War between 1853-1856 between Russia and a coalition of France, Great Britain and Austria resulted in diplomatic tensions early, but those dissipated after a change in the Russian monarch.

Russia wanted to extend its influence in the Ottoman Empire by having control over holy sites of Christianity (the Ottomans actually gave that control to France) and invaded two provinces of the Ottoman Empire. France, Britain, and Austria came to the aid of the Ottomans, fearing Russian overreach. The war ended benevolently when Tsar Nicholas I died and his son, Alexander II, took the throne and wanted the conflict over.

This will actually create a positive relationship between Russia, Great Britain, and France in the future.