5.7 The Congress of Vienna

The Congress of Vienna met in 1814-1815 to re-establish European order and essentially “undo” the French Revolution. Through conservative and diplomatic statecraft, their goal was to restore order and create a framework for peace and stability in Europe. 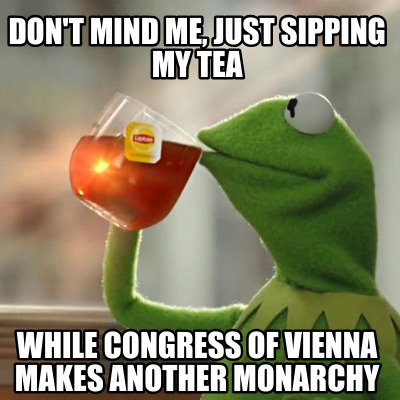 Great Britain, Prussia, Russia, and Austria, the four great powers, were all present; however, it was Austrian Prince Klemens von Metternich who led the Congress. Metternich recognized that the social and political change of the French Revolution was dangerous to established European monarchies.

Liberalism and nationalism needed to be eliminated to keep Europe’s balance of power and prevent uprisings. Moreover, the Congress of Vienna and the great powers wanted to ensure that no nation (especially France) would ever be able to dominate Europe again.

To placate the French and maintain order, France was given generous peace terms. The Congress of Vienna wanted to prevent resentful sentiment towards the Bourbons. All the land that France had gained before November 1, 1792, was allowed to be kept.

Although Poland wanted their independence recognized, it was made into a Russian territory. Additionally, a series of new European states were created to prevent territorial expansion. The Kingdom of the Netherlands was developed by combining the Austrian Netherlands and Dutch territory. Genoa was given to Piedmont. Prussia received more land along the Rhine River.