Rejecting any aid from the Marshall Plan, the Soviet Union implemented its own economic policies which came to be known as the Molotov Plan and the Council for Mutual Economic Assistance (COMECON). They were far less successful than the Marshall Plan and would result in stunted economic growth for Eastern Europe.

The Rise of the West

Thanks to the Allies winning the second Great War, the United States catapulted into prosperity, eventually becoming a global superpower. The war had restored their economy from the depths of the Great Depression and proved they had the strongest military in the world.
Now wanting to restore order to the world, and prevent the spread of communism from their global rival, the U.S. exerted strong military, political, and economic influence on Western Europe.
Economically, the U.S. came up with the Marshall Plan and International Monetary Fund (IMF) to aid in stimulating the international economy. The United Nations, founded in 1945 and replacing the League of Nations, came up with the World Bank to assist developing countries with loans. These, as well as that General Agreement on Tariffs and Trade (GATT) and the World Trade Organization (WTO), promoted global trade and capitalism.
Militarily, the U.S. provided troops to any countries under threat of communism. This could be seen in the Vietnam War, Korean conflict, and in Greece and Italy. They also formed NATO (North Atlantic Treaty Organization) with England, France, Canada, and other Western European countries. It was an alliance between them all to defend each other if they were ever attacked.
Politically, the U.S. tried to spread, and reinforce, democracy throughout the world by any means necessary. This could be seen in the U.S. foreign policy of the time known as the Truman Doctrine (1947). Preaching containment, the U.S. swore to provide aid to any country fighting off communism due to fears of a domino effect. 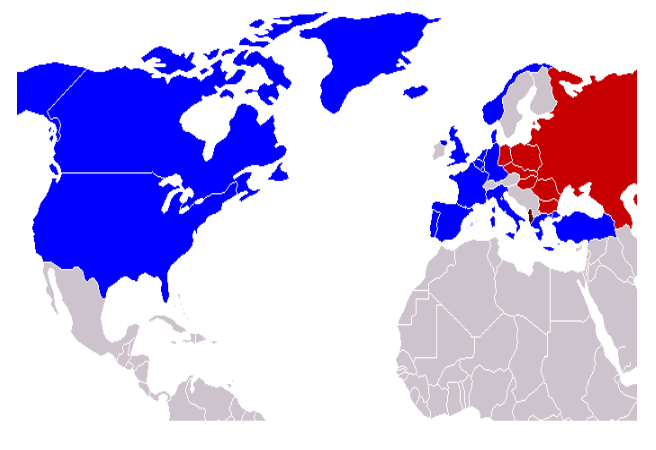 Behind the Iron Curtain

Meanwhile, the other great superpower of the time, the USSR, wanted to make sure that the countries under its hold did not associate with capitalism or democracy. They would exert their own military, political, and economic influence over the Soviet Bloc with less favorable economic results than the U.S.
Militarily, Stalin created a mirror of NATO known as the Warsaw Pact. It highlighted Russia’s control of Eastern Europe and stood as a symbol of opposition to Western Europe. Russia also provided troops to any countries that were becoming communist or had government regimes that they supported. This led to many Russian and American conflicts in “hot wars.”
Politically, the USSR established multiple puppet governments in places like Romania and Poland. Stalin held a series of coups and rigged elections to elect government officials that reported to Moscow. Any countries under the grasp of the Soviet Union were communist and subject to Stalin’s authority (cominform). When Czechkoslovakia’s democratic government was overthrown, it showed that it was Stalin’s way or no way at all.

Countries within the Soviet bloc of Europe all surrendered to communism. Central planning, extensive social welfare, and government-dictated production caused individuals to feel suppressed. Many individual rights were vanishing, and emigration from these countries was being limited.
The Berlin Wall was built in 1961 so that those living in East Berlin could not escape to the more luxurious and better off West Berlin. People were isolated from their families for years, and some lost their lives trying to get out of East Berlin.
The condition of Eastern European countries often depended on the status of the Soviet Union. As the power and stability of the Soviet Union fluctuated (see 9.7!), so did the condition of its dominated nations. With the fall of the USSR came the rise of new national identities which would lead to instability that can be seen today.

In some nations, there was much discontent with the policies pushed onto them by the Soviet Union. As the Soviet Union slowly weakened (9.7 - De-stalinization!), various nations would rise up against the USSR and their grasp.
In 1968, many citizens in Czechoslovakia were angry at the communist head of the government and his censorship of press and natural rights. The economy was struggling, and many felt that the USSR was using them for their own benefit. Angered, Alexander Dubček led the period of mass political protest and liberalization that became known as the Prague Spring.
Almost 15 years earlier in 1956, many Hungarians felt much the same about their government and the USSR. Known as the Hungarian Revolution of 1956, a nationwide revolt against the Soviet-imposed policies lasted only a few weeks.
In both cases, the Warsaw Pact came into effect. The Soviet Union swiftly crushed both and reasserted their grasp over Eastern Europe despite internal issues. Any reforms that were made during the revolts, especially in Czechoslovakia, were reverted. Many former government leaders were replaced with stricter, more oppressive leaders as well.