Tensions were mounting from the moment the Treaty of Versailles 1919 was signed to the moment Poland was invaded. Extreme economic conditions left many Europeans desperate for change, no matter what that change looked like. When authoritarian leaders began promising that change -- to break from economic stress, grow the economy, boost the morale of the nation, and create a great nation -- they were all voted into office.

In Germany, Hitler violated the Treaty of Versailles with his land claims in Austria and Czechoslovakia. He, then, remilitarized the Rhineland. These egregious violations were overlooked by Britain and France due to fears of starting another war.

The immediate cause of WWII was the German and Soviet invasion of Poland. Poland had been defined and protected by the Treaty of Versailles. However, there was no real force behind the League of Nations, so Hitler and Stalin were not intimidated.

Germany was first to invade Poland. 16 days later, the Soviet Union joined them. Both were upset with the lands they had lost in the Treaty of Versailles with the creation of Poland so they sought to reclaim that land.

Great Britain and France declared war on Germany, but not the Soviet Union.

Fighting styles and weaponry were similar to WWI, with the exception of some upgrades and developments.

WWII saw German expansion deeper into allied territory than in WWI. Hitler was able to expand his control across northern Europe, with the exception of the United Kingdom and Sweden. His allies controlled nearly all of southern Europe with the exception of Switzerland, Portugal, and Spain. However, Hitler and Mussolini had both received aid from Francisco Franco in Spain and used his land as training grounds for their soldiers.

Allied invasions of Italy began in 1943. After taking the island of Sicily, US and Allied forces used it as a base to mount an successful attack on Rome. Mussolini was forced to resign and was imprisoned. Secret negotiations began with the provisional government to work on removing German troops from Italy.

The major turning point of the European Theatre was the D-Day invasion on June 6, 1944. The United States organized a mass naval invasion of Normandy, France (just north of Paris), stormed the German beachhead there, and used this invasion as a means of marching on Paris. The Allied forces retook Paris and the country of France, then began pushing into Belgium. In April of 1945, Hitler committed suicide and the Allies began liberating the remainder of German occupied areas and concentration camps. 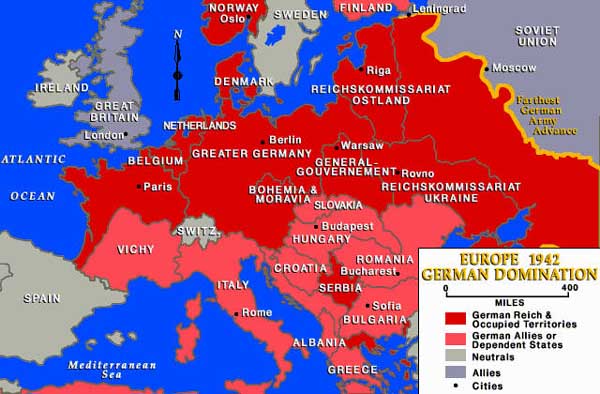 In the east, Germany moved into Soviet territory. The Soviets struggled with their new Five Year Plans, failing to produce enough food, ammunition, or weaponry for their population. However, they were prepared when the Germans marched toward Stalingrad. Over a million Soviet soldiers held off the Germans, and as the Germans ran out of food and supplies, they were forced to surrender. This was the turning point of the Eastern Front.

Italy had plans to rebuild the former Roman Empire under fascist rule. Germans sent troops to aid the Italian invasions of Greece and Yugoslavia. From there, they moved into North Africa. The Germans planned to take North Africa, move through the Middle East, and attack the Soviet Union from the south. However, they were met with Allied forces and over the course of three years, the Allies eventually prevailed.

By 1944, the Germans were engaged in battles with the French, the British, North Africa, the Soviet Union, and US Forces in all of the above locations. Fighting a multi-front war eventually began to weigh on the German military and supply line. With their forces split for the majority of the war, they were unable to fully focus on any front and began losing ground. After the Allied invasion of Italy, North Africa and the Middle East were lost to the Axis powers.

The Meiji Restoration of 1868 in Japan ended a period of isolation after the Tokugawa Shogunate was overthrown. This new regime sought to introduce Japan to the changes of the developed world, but to do so, they needed resources. The only way to obtain them, being from a mountainous archipelago, was to expand their territory.

Japan had successful invasions of Manchuria, China, and the Korean peninsula against the Russians. Through this, they will obtain the use of key ports and key resources such as coal, petroleum, iron, and more. They could have traded, but wanted a monopoly, so they used war to achieve control.

The Japanese invasion of Manchuria in 1931 prompted a response from the US and the League of Nations. Japan removed itself as a member of the League of Nations. Japan was violating the Open Door Policy, a free trade policy between the US and China, and committing mass atrocities, such as the Nanjing Massacre in 1937. The US placed harsh economic sanctions on Japan, which only made them want to stand stronger and push further into China. After failed negotiations, war seemed inevitable to the Japanese and they bombed the US Pacific naval fleet at Pearl Harbor, Hawaii on December 7, 1941.

This set off a series of military engagements between the US and Japan. The attack was successful, but not as successful as it could have been due to training exercises that kept many ships at sea. The most immediate attack was a firebombing of Tokyo in April of 1942, but the most significant was the Battle of Midway later on that year. US forces began a series of Island Hopping to keep Japan from its expansionist goals.

This theatre ends with the US attempting to force a surrender from Japan with a threat of the US invading, but it didn’t work. On August 6th and 9th, 1945, President Truman made decisions to drop atomic bombs on the cities of Hiroshima and Nagasaki. Japan surrendered in the days after.