View the following practice Unit 6 DBQ prompt where students were asked to practice analyzing, sourcing, and using a document as evidence. The students used the passage below as evidence to support an argument about the following prompt. They were asked to include both usage (summary) and sourcing analysis (HIPP) in their practice paragraph submissions.
HIPP is an acronym for sourcing points:
Historical Context
Intended audience
Purpose
Point of view
The corresponding feedback is provided by Fiveable teacher Caleb Lagerwey. It is important to learn how other students responded to improve one's own DBQ writing.

Evaluate the extent to which various factors changed the American South from 1876 to 1898. 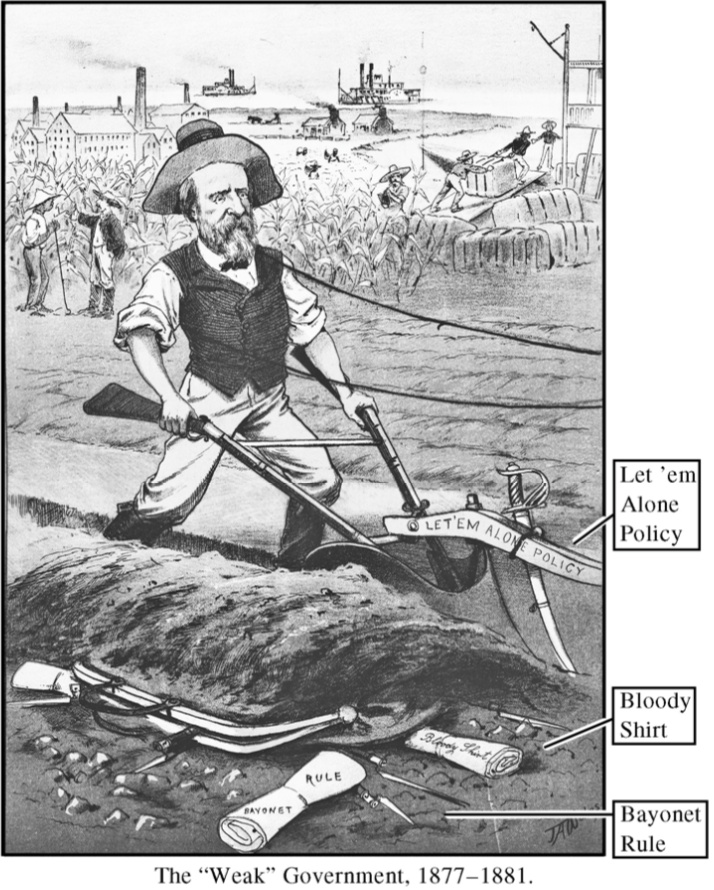 Intro:
The American Civil War during the 19th century greatly impacted the South. Homes were leveled with the ground, fields burned, and communities destroyed. This all however changed with the Reconstruction Era in which the goal of the United States was to unite as one large nation once again. While developments in the economy such as the creation of the “New South” idea were temporary changes to the Southern lifestyle, the continuance of sectionalist policies such as the Let’em Alone policy and the policy of sharecropping, ultimately changed the American South to a great extent.
Document Use:
As the Compromise of 1877 took effect in the United States, many aspects of the Southern lifestyle changed back to accommodate for the original Southern purpose: to support a agriculturally dependent economy. As J.A. Wales portrays in a Puck Magazine cartoon, the newly elected republican president, James Garfield, encouraged policies that would further lift the Northern guidance off the South. By depicting Garfield as using wartime weaponry, like the sword and guns as a plow to the southern land, Wales helps identify that even though factories and ships were quickly developing, as seen in the background, things such as the system of sharecropping and an end to the reconstruction political actions were clear drawbacks of the end of reconstruction and of the development of a weak government. This of course is what Wales’s purpose is in the cartoon; depicting the weak government that was present after the period of reconstruction ended. By visually representing this purpose in the form of a cartoon, Wales is able to accurately represent that while positive changes in the South took place from 1876 to 1898, continuance of systems such as sharecropping and hands off policies played a larger role in reshaping the Southern lifestyle as reconstruction ended.

You started off well by talking about the aftereffects of the Civil War on the American South. That would earn the Contextualization point. For your thesis, you want to avoid using language directly from sources/cartoons (“Let’em Along Policy”) and leave evidence for your body paragraphs. Also, if this was a longer prompt with more documents, consider adding a change argument too. Nice work.

Southern states were largely controlled by the Union after their loss in the civil war and weak admission back into the United States. Their control did not last long though as the desire for control of their own governments led to troops leaving the former confederate states and the compromise of 1877. This led to the formation of the “New South” which ended up not being much different than the Confederacy which the continuation of slavery through its legal counterpart, sharecropping, and discrimination of African Americans through black codes and later Jim Crow laws.

You did a good job of setting up the essay, but consider adding a little more specificity to the discussion of the Compromise of 1877 by talking about how it ended Reconstruction. Your thesis was all continuity, which is fine and would earn the point; just be careful with prompts that have more docs, since those might need a change paragraph too. Nice work.

Contextualization:
Following the Civil War in the 1860s, Southern states, which had been treated as a separate nation for much of the century, were now to be included into the Union again. However, the status of blacks and the reentry of many states into the Union was a challenge that faced the South after towns had been destroyed and slavery had been prohibited. The idea of military Reconstruction, which took place for the years after the Civil War, was not successful and while Southern men had gained many rights during this period, high taxes and political scandals turned many anti-Reconstruction Southerners even more hostile than they were before. In addition, the end of Reconstruction only spelled trouble for the “freed” blacks. Although the end of Reconstruction brought some educational opportunities for blacks, it led to further revolt, white supremacy, and the creation of Jim Crow Laws.
Body Paragraph:
For example, the end of Reconstruction led to white supremacy in the South. Under Hayes’ presidency, federal troops were pulled out of South Carolina and Louisiana and Southern Democrats regained control of the region. With this, many blacks thought that they could emulate the northern industrialization in the “New South,” but to their surprise, sharecropping and tenant farming continued for many years. In addition, the Let 'em Alone Policy was enacted, which meant that federal control in the area was gone. This led to the replacement of bayonet rule and the bloody shirt campaign with a policy of neglect as the government paid no attention to the status of blacks and left everything up to groups such as the Redeemers and the Freedman’s Bureau to control what took place. As shown in the background, industrial developments were still taking place in the North while the South was using sharecropping and agricultural methods to help the economy. The author, J.A. Wales, likely created this cartoon to criticize the loosening of federal control as his usage of the word “Weak” in his cartoon title shows that he advocated for the Northern way of doing things, under federal control, as shown in the background, in contrast to how the South was operating against their will to sharecrop and exclude Southerners from the trending industrial parts of the economy. Hence, the idea of letting the South alone only led to White supremacy in economic matters and did little to help the status of “freed” blacks.

Nice work! Your Contextualization and thesis would earn the point. Your Contextualization in particular was well done since it used Reconstruction well and made it relevant to the prompt. In your body paragraph–as others before you did–you saw the cartoon as pro-Northern when it was really anti-South. The “weak” part is sarcastic and shows the South prospering, despite the government not getting involved. That’s okay (plus, I didn’t give you the first half of the cartoon).

As a result of the Southern loss during the civil war, the reconstruction period of 1865-1877 was characterized by constant regulation of the South that allowed for a growth of the Northern power despite Johnson’s implicit support of the South. Although, during the 1876 to 1898 period, the end of reconstruction allowed for changes that allowed for a shift towards an increase in Southern power in the government, ultimately, the nature of the agricultural economical structure of the South and the continuance of the social class hierarchy undermined the change that occurred post-reconstruction. After reconstruction and the end of Grant’s administration, the bloody shirt campaign began to loose significance among the Southern people, granting them the courage to more openly continue practices, and creating regulations like the slave codes to legally enforce them, such as sharecropping which was basically post civil war slavery under another name due to the binds it placed on the newly “free” men to a landowners land.

Your intro paragraph would earn those two points, both Contextualization and the Thesis. The Grant administration and Bloody shirt pieces of evidence were a nice touch. Well done.