Beginning of the War

In April of 1775, the British sent numerous troops to Lexington and Concord, Massachusetts, to seize stored gunpowder that the patriot rebels harbored. Paul Revere went on his famous ride warning that the British were coming, urging the colonial minutemen militia to get up and get their guns. Gunfire erupted in Lexington, leaving eight American colonists dead in this brief battle lost by the minutemen. About 100 spectators watched. These were the first shots of the war known as “the shot heard round the world.”

The British redcoats continued to the nearby town of Concord. After the British found no weapons, they started a retreat to Boston. The minutemen utilized gunfire and guerilla warfare tactics against the shocked British. The redcoats suffered 300 casualties. War had started.

Shortly after these battles, the Second Continental Congress met in Philadelphia in May of 1775. Here they selected George Washington as the commander of the colonial army.

The British now sent 35,000 troops to New York City in July of 1776. George Washington suffered a severe loss at the Battle of Long Island and retreated to New Jersey. However, Washington crossed the Delaware River and secured a crucial victories at the Battle of Trenton.

The turning point of the war took place at Saratoga, New York, along the Hudson River in October of 1777. Three British generals were to coordinate and meet near Albany and defeat the Americans, which would then divide America geographically. The Americans defeated the British.

This colonist victory motivated France to form a military alliance with America. Some other European countries formed alliances with France to fight Britain in other parts of the world. Britain now had other war priorities. Along with the aid of French soldiers and capital, America was on its way to winning the Revolutionary War.

Meanwhile, British General Charles Cornwallis was waiting for reinforcements in Yorktown, Virginia, along the Chesapeake Bay. For the Americans, General Washington made secret plans with France to convene in Yorktown and have the French navy blockade Cornwallis. At the Battle of Yorktown, this tactic worked, and Cornwallis surrendered on October 19, 1781. The war was over. 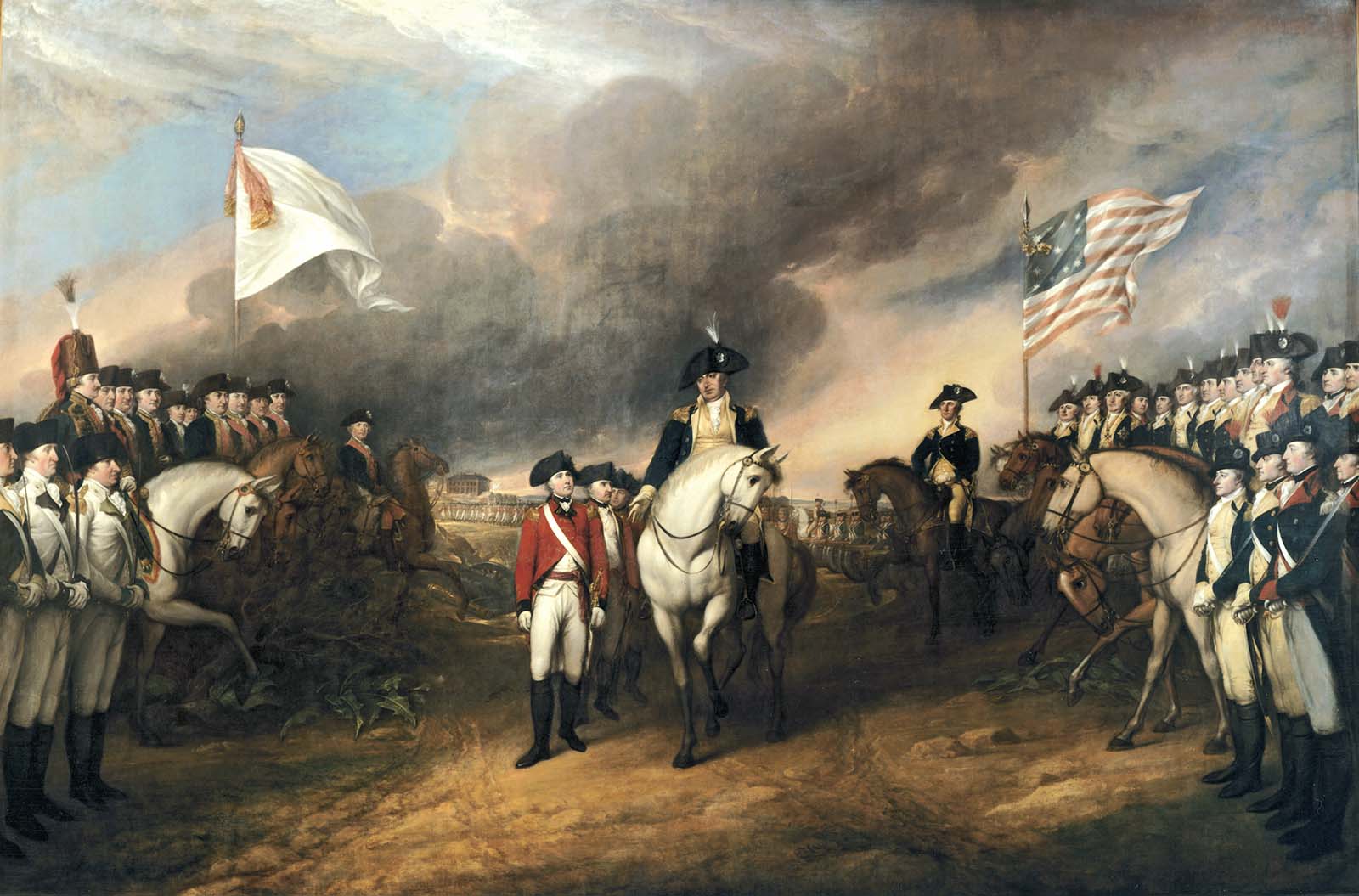 Lord Cornwallis’s surrender signaled the victory of the American revolutionaries over what they considered to be the despotic rule of Britain. This moment would live on in American memory as a pivotal one in the nation’s origin story, prompting the United States government to commission artist John Trumbull to create this painting of the event in 1817. John Trumbull, Surrender of Lord Cornwallis, 1820. Wikimedia.

Three noted patriots traveled to Paris for peace negotiations. The Treaty of Paris of 1783 gave America independence from Britain and expanded the geography of America. America would get land westward to the Mississippi River and further to both the North and the South. Britain was happy in attempting to damage the Franco-American alliance.