The Atlantic Ocean was a highway that brought people from Europe, Africa and the Americas together. Various goods, such as raw materials, foodstuffs, and textiles were exchanged. Most importantly, the interactions and exchanges of people took place. These foreign contacts would have a significant impact on Europeans, colonists, black slaves and Native Indians.

Mercantilism was an economic theory that was used by most European countries from c. 1500-1750.  Mercantilists believed that money (gold and silver) was power and that the more gold you accumulated the more power you had. To get the gold, a country had to export more than it imported. In essence, mercantilist countries try to export (sell) as much as possible, while importing (buying) as little as possible, thus building up their gold reserves.

This theory was a European justification of acquiring colonies. Europeans could export products to their colonies for money while also importing products from the colonies that they needed.

Any hope that the colonists had for economic independence was crushed by the British policy of forbidding colonial trade with other countries. These Navigation Laws, started in 1650, were not always strictly enforced and caused some colonists to smuggle products. This “salutary neglect” by Britain lasted until 1763, when the Brits felt compelled to enforce laws to get money to pay the debts from the French and Indian War.

There were some advantages to mercantilism for the colonists. Those colonists who produced shipping parts and tobacco for Britain had a permanent, lucrative British customer who demanded these products.  Overall, mercantilism had a trickle down effect on the prosperity of the colonies.

However, most colonists despised mercantilism in principle because it did not allow them economic freedom to produce what they wanted and to sell it to other countries. The South produced rice, cotton and tobacco-all products that the British needed. New England would be jealous of this favoritism. Southerners also despised Britain because Britain controlled prices and the products that the southerners had to purchase. 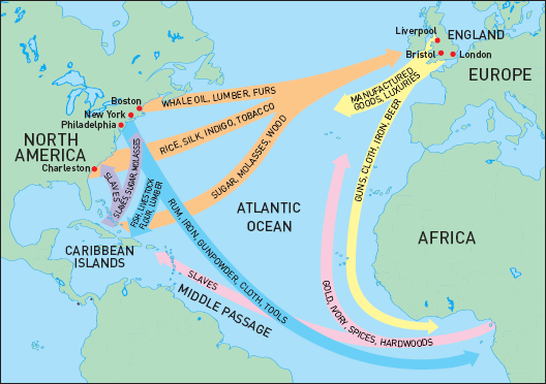 The West Indies were a significant part of trade with the Americas. Sugar and molasses went North to New England to make rum, which was then sent to Africa. Colonial food and timber was then sent to Jamaica and other profitable islands.