The US entrance into WWII ended the Depression since the US quickly became, in the words of President FDR, the Arsenal of Democracy as it turned its production capacity toward making war matériel. This production supplied both the US military and its allies like the UK, China, and USSR. Facing a labor shortage because of the 15 million men and women in the armed services, unemployment virtually disappeared during the war.

The US produced an astonishing quantity of weapons and goods during the war. You should know a few examples of this. Liberty Ships were US cargo boats that were made cheaply and quickly, and they proved useful in moving men and matériel around the world during the war.

Addressing Congress on January 6, 1941, the president delivered a speech that proposed lending money to Britain for the purchase of US war materials. He justified such a policy by arguing that the US must help others nations defend “four freedoms:”

The US government raised taxes and sold bonds (loans by citizens to the US government) just like in WWI, but at an unprecedented level. The government also organized and supervised the US economy in new ways through rationing and through agencies like the War Production Board (WPB) and the Office of Price Administration (OPA) that controlled war industries (no cars; only tanks!) and consumer prices, respectively.

US industries did a booming business, far exceeding their production and profits of the 1920s. The depression was over and unemployment disappeared. Instead of automobiles, tanks and fighter planes rolled off the assembly lines. Henry Ford built the Willow Run factory, covering 67 acres, where 42,000 workers turned out a B-24 bomber every hour. A shipyard in California could turn out an entire ship in just 14 days.

Just like in WWI, the manpower shortage led to new opportunities for women and minorities, who worked in factories to replace the enlisted men. 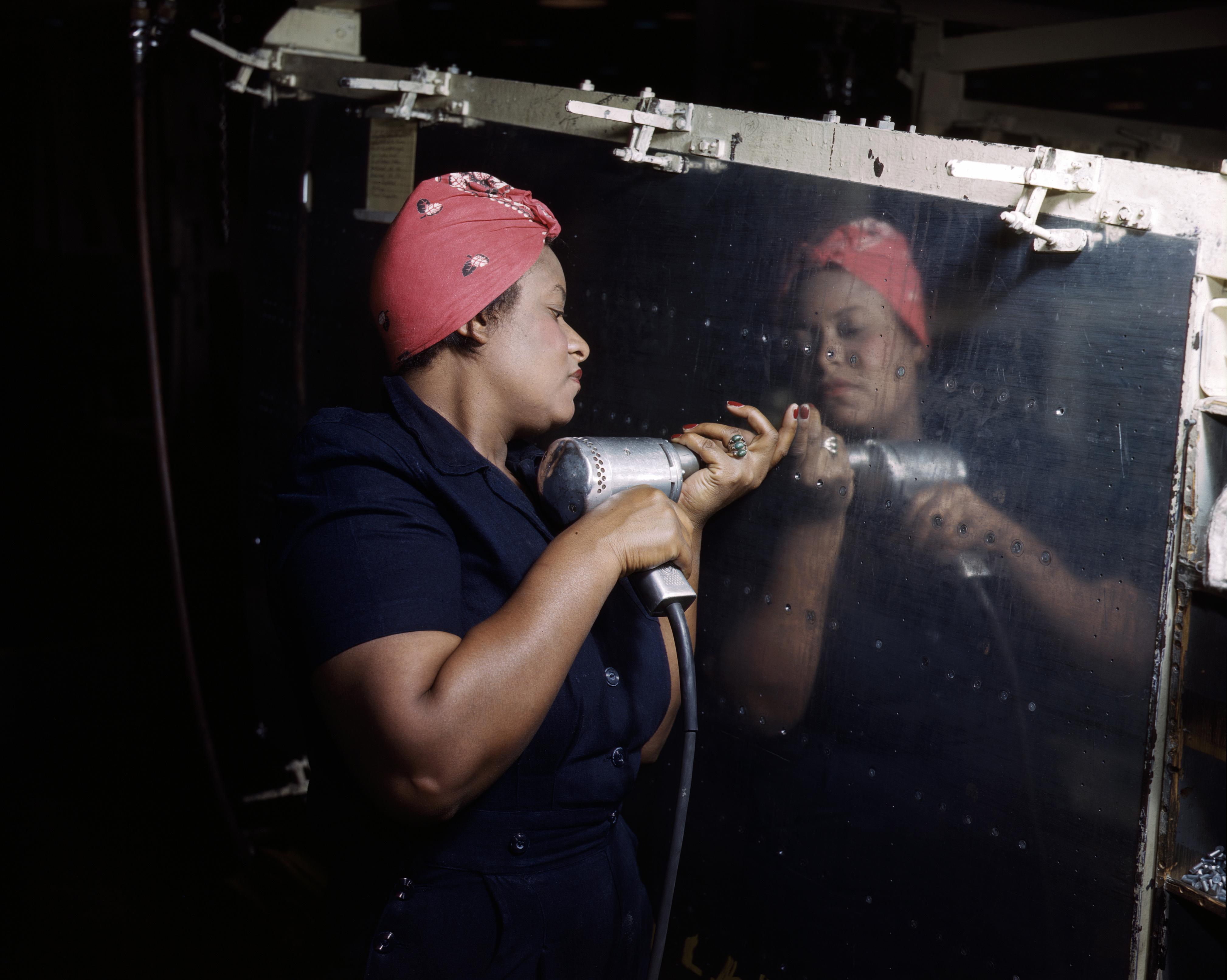 Others worked at home on assembly lines. Rosie the Riveter became a symbol of women taking jobs in defense industry factories. These jobs were usually the first high-paying jobs they’d ever had, and some tried to stay in their posts even after the war was finished.

African Americans were drafted into segregated units led by white officers, but many began to fight back against this Jim Crow army and fought with distinction (example: the famous flying Tuskegee Airmen). Some began to talk of a Double V Campaign: they sought victory over fascism abroad and over racism at home.

A. Philip Randolph, a prominent Black leader, used the threat of a march on Washington during the war to get FDR to pass Executive Order 8802 prohibiting racial discrimination in defense industries.

There was racial tension between White and Latinx people on the West Coast too: the Zoot Suit Riots in LA occurred when white servicemen roamed Mexican-American neighborhoods attacking Latinx people. The Bracero Program recruited Mexican laborers to work in US agriculture and fill in for missing White workers.

Some native people saw new opportunities such as the Navajo Code Talkers, who were famous examples of the US using Native Americans speakers as communication experts to avoid decoding by the enemy

By far the most controversial aspect of the home front was Japanese American internment camps authorized by FDR in Executive Order 9066: war paranoia on the West coast combined with longtime discrimination against Asians and resulted in over 110,000 Japanese Americans—over ⅔ of whom were US citizens!—being detained in prison camps for the duration of the war. (This was dumb and racist: no Japanese were detained in Hawaii where the Japanese actually attacked, since the US needed them for labor).  When some Japanese tried to challenge the order the Supreme Court was no help: internment was authorized in Korematsu v. US (1944). Despite this discrimination, Japanese men fought for the US in the European theater: the 442nd Infantry Regiment fought the Nazis and became the most highly decorated American unit in US history.