Diversity in the Colonies

The culture of the thirteen colonies was constantly evolving. Various European ethnic and religious groups migrated to America between 1600-1750. They brought with them their different religious, political, social, and cultural beliefs. However, over time, these European beliefs would both blend and conflict with a new way of life that would shape early American identity. Were these new people more European or more American?

By the start of the French and Indian War of 1754, 80% of the population was white, with 20% African. Most of this white population was comprised of the English and Welsh, who could be found in New England and along the Atlantic Coast. The African slaves worked largely in the South, while Germans, Scots-Irish, and the Swiss would move further inland and into the frontiers of America. 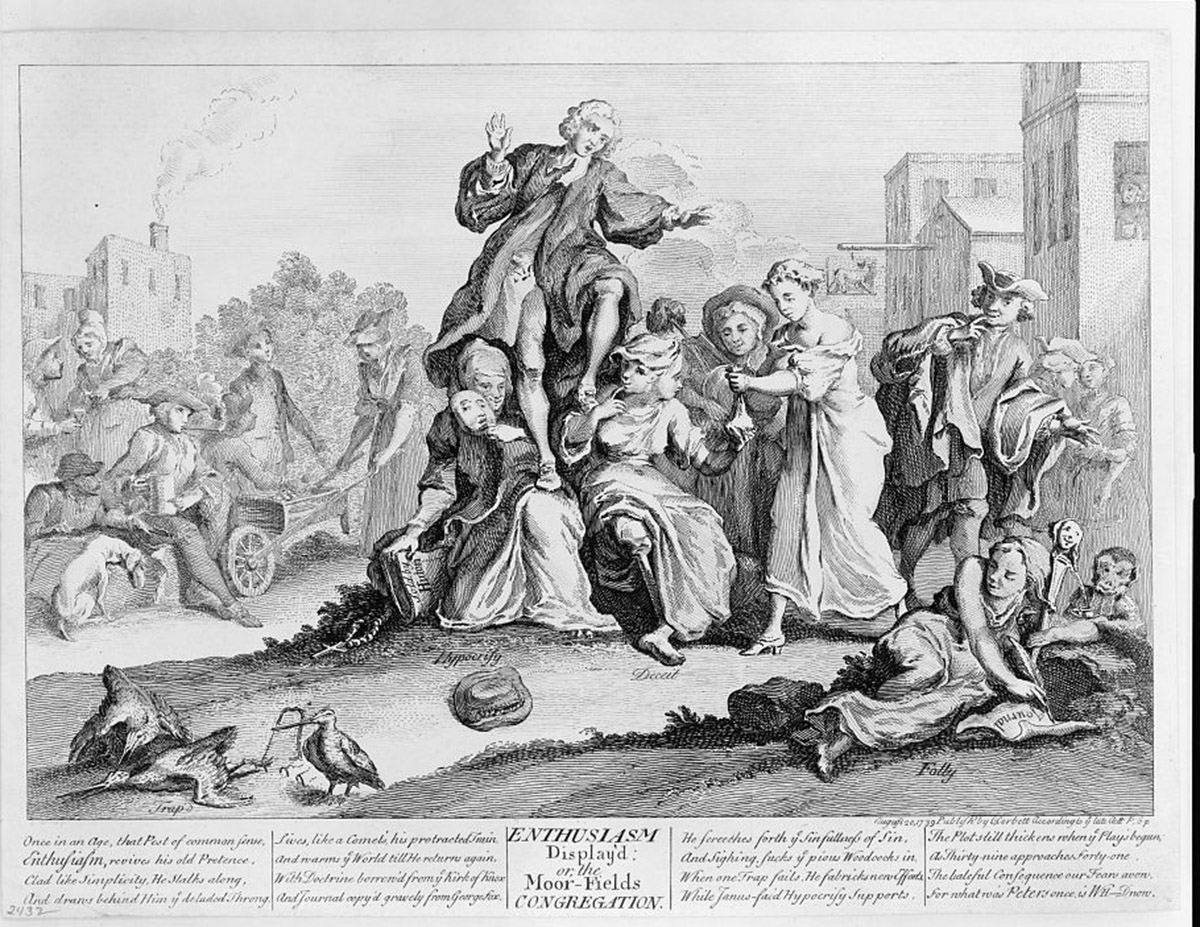 George Whitefield is shown supported by two women, “Hypocrisy” and “Defeat”. The image also includes other visual indications of the engraver’s disapproval of Whitefield, including a monkey and jester’s staff in the right-hand corner. C. Corbett, publisher, “Enthusiasm display’d: or, the Moor Fields congregation,” 1739. Library of Congress.

While America became more ethnically diverse by 1750, it also displayed religious diversity. Protestantism was the predominant religion in America while other religious groups like the Jews (New York/New Jersey) and Catholics (Maryland) practiced their beliefs. The Puritans formed the tax supported Congregational Church, found mostly in New England, while the South had the tax supported Church of England, also known as the Anglican Church.

The Great Awakening movement of the 1700s rekindled the religious spirit of an America that was growing tired of the strict codes of Calvinist Puritans and becoming less interested in church. Dynamic preachers like Jonathan Edwards and George Whitefield scared their followers into being better souls. “Sinners in the Hands of an Angry God”, a famous sermon delivered by Edwards, converted sinners into saints as he declared that hell was “paved with the skulls of unbaptized children.”

Culturally, the European ideas of the Enlightenment in the 1700s also had an effect on the colonies. The Enlightenment emphasized ideas such as a belief in science and reason over religion, the equality of all people, the idea that individuals can control their own destiny, and the political ideas associated with democracy and republicanism.

The American colonies were part of the vast British Empire. Many immigrants from England would imitate English political, economic, and cultural characteristics while living in the New World.

Politically, the colonies created their government based on the British model. Most colonies had a governor, an upper house, and a lower house form of government that reflected the structure of the British king and his Parliament.  Each colony had a representative in London to help both London and the colonies mediate potential problems.

English common law was used and colonists believed that they enjoyed the rights of European Englishmen, such as the right to liberty, equality, and to own private property. The colonial judicial system looked like the Old World with county courts and local judges administering justice. County government structures were found in the rural South and townships were used in New England.

Economically, the colonies were at the mercy of the British mercantile system. Colonists could only trade with England and only English ships could be used to transport goods. As part of these Navigation Acts, ships bound for the colonies had to go through English ports.

Mercantilism directly affected what the colonists would produce and buy economically. Colonial raw products such as iron, ship parts, timber, flour, wheat, tobacco, rice, furs, and indigo would be sent to England while finished products like guns, tools, textiles, clothing, furniture, beads, tea, and spices were sent to the colonies from England.

These finished products from England created a material culture in the colonies that looked the same. Culturally, the people of the coastal urban areas of the colonies seemed to mimic the rich, gentrified aristocrats of old England. They would drink tea, go fox hunting, read the local newspaper, display proper etiquette, enjoy nice linens, and use fancy ceramic cups/saucers while smoking tobacco.

Early Conflicts Between Europe and the Colonies

The New World initially copied English ways and institutions. However, conflicts erupted between these two worlds that led the colonists to create a more independent American identity. From 1600-1750, political and economic issues between Britain and the colonies tested the loyalty of Americans to the Crown.

Throughout much of the 1600s and the early 1700s, Britain followed a policy of salutary neglect towards its administration of the colonies.  London was inconsistent and lax in enforcing its laws, particularly the rules of mercantilism. By neglecting the colonies, the British thought that the colonists could make money from other regions, like the West Indies, while Britain could focus on more important matters at home. The money earned by the colonists could be spent on British manufactured goods.

Salutary neglect led to the American desire for self-rule and independence. Politically, the cherished town meetings of New England and the colonial legislations were good examples of the colonists doing their own thing and defying the Brits. King James I of England detested the colonial House of Burgesses in Virginia as too disloyal, which resulted in the king revoking the charter of Virginia and placing it under his control in 1624.

The English Civil War of the 1640’s allowed several colonies in New England to form their own New England Confederation in 1643. This confederation used their own resources to fight against the Indians and the French. However, in 1684, Charles II paid more attention to the colonies and punished rebellious Massachusetts by revoking its charter.

Shortly after this, a major conflict happened in 1684 when England replaced the New England Confederation with the royal Dominion of New England. This was done to strengthen defense against the Indians and to also enforce the English Navigation Laws of trade that helped England while restricting the colonists. The colonists despised Sir Edmund Andros, the English leader of the new dominion, who restricted their town meetings, took away titles to land, levied new taxes, and enforced the Navigation Laws.

Other problems stemmed from land conflicts involving colonial westward expansion into Indian territory. King Philip’s War in New England in 1675, frequent Indian conflicts with poor white farmers in Virginia in the 1670’s that led to Bacon’s Rebellion, and the rebellious Scots-Irish expansion and settlements in the frontiers of Pennsylvania were all problems that both the colonists and the English Crown attempted to manage.

The most serious conflict between the colonists and the British was the restrictions of mercantilism. Colonists resented the rules that restricted their ability to trade with other countries. Many protested this rule by smuggling colonial products to the French West Indies, thus only starting a rebellious attitude.