The precise causes of the end of the Cold War are debatable, but there are several factors that you should keep in mind.
Reagan started his presidency determined to restore the military might and superpower prestige of the US and to intensify the Cold War competition with the Soviet Union. He called the Soviet Communists “the evil empire” and “focus of evil in the modern world.”

The Reagan administration spent billions to build new weapons systems. The emphasis would be on new weapons, ranging from the B-1 bomber, the MX missile, and expansion of the navy from 456 to 600 ships. The US sped up research and the development of the Strategic Defense Initiative (SDI), an antimissile system based on the use of lasers and particle beams to destroy incoming missiles in outer space. It was dubbed “star wars” by the media. Reagan defended the system as a legitimate attempt to free the US from the deadly trap of deterrence, with its threat of nuclear retaliation to keep the peace.

The US supported regimes seeking political change and embraced revolutionary tactics. That is exactly what happened in Nicaragua. The Sandinista coalition finally succeeded in overthrowing the authoritarian regime. Reagan accused the Sandinistas of driving out the moderates, welcoming Cuban advisers and Soviet military assistance, and serving as a supply base for leftist guerillas in nearby El Salvador.
Reagan asked Congress for the money and authority to oust the Sandinistas. Congress was fearful of a repeated Vietnam fiasco and refused. Reagan then opted for covert action. The CIA began supplying the Contras, exiles fighting against the Sandinistas from based in Honduras and Costa Rica. They tried to disrupt the economy, raiding villages, blowing up oil tanks and even mining harbors.

There was concern over the fate of 6 Americans held hostage in Lebanon by groups thought to be loyal to Iran’s Ayatollah Khomeini. The administration proposed trading American anti tank missiles to Iran in return for the release of the hostages. The Iranians were desperate for weapons for the war which they were fighting with Iraq. Iran seemed open to the deal.
The CIA director interpreted the Iran initiative as an opportunity to use the National Security Council to mount the kind of covert operation denied the CIA under the post-1975 congressional oversight policy. They were able to persuade the president to go ahead with shipments of antitank missiles and anti aircraft missiles to Iran. It was a bad policy, but what came next was criminal.
The Reagan administration had been searching for a way to supply the Contras. Oliver North, who worked for the NSC, was put in charge of soliciting donations from wealthy right wing Americans. In what North later described as a “neat idea”, he could use profits from the sale of weapons to Iran to finance the Contras.
The ploy was illegal and unconstitutional, since it meant usurping congressional power of the purse. The secret got out and administration officials tried to shield Reagan. A congressional investigation showed it was unclear if Reagan had approved the Contra diversion.  Several officials were prosecuted. 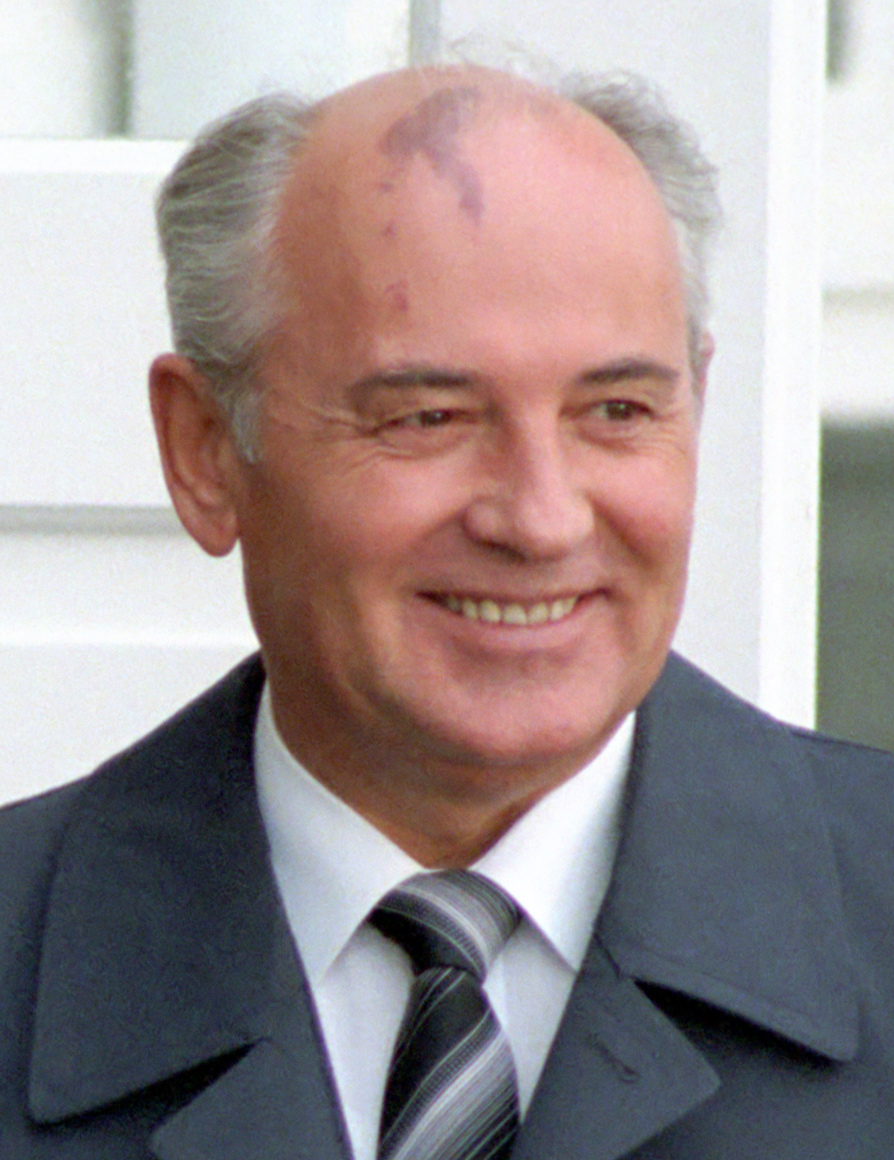 Soviet premier Brezhnev’s death in 1982 led to the selection of Mikhail Gorbachev, a younger more dynamic Soviet leader. Gorbachev was intent on improving relations with the US as a part of his new policy glasnost (political openness to end political repression and move toward greater political freedom for Soviet citizens) and perestroika (restructuring the soviet economy by introducing some free-market practices).
The Soviet economy had been declining steadily. He needed a breathing spell in the arms race and a reduction in Cold War tensions in order to carry out sweeping reforms at home. In 1987, the president challenged the Soviet leader to follow through with his reforms, standing in front of the Brandenburg Gate and Berlin Wall, giving a famous speech with the line “Mr. Gorbachev, tear down this wall”
A series of summit meetings between the two leaders broke the chill in superpower relations and led in 1987 to an Intermediate Nuclear Forces (INF) treaty, by which they agreed to remove and destroy all intermediate range missiles in Europe.

In China, during the spring of 1989, pro-democracy students demonstrated for freedom in Beijing’s Tiananmen Square. Television cameras from the West broadcast the democracy movement around the world. Under the cover of night, the Chinese Communist government crushed the protest with tanks, killing hundreds and ending the brief flowering of an open political environment in China.

Breakup of the Soviet Union

In 1990, the Soviet Baltic republics of Estonia, Latvia, and Lithuania declared their independence.  After a failed coup against Gorbachev by Communist hard-liners, the remaining republics dissolved the Soviet Union in December 1991, leaving Gorbachev a leader with no country.
Boris Yeltsin, president of the Russian Republic, joined with nine former Soviet republics to forma. Loose confederation, the Commonwealth of Independent States (CIS). Yeltsin disbanded the Communist party in Russian and attempted to establish a democracy and free market economy.

Iraq, in 1990, invaded Kuwait taking control of the oil reserves. Bush quickly concluded that Saddam Hussein’s aggression must be reversed. He started by persuading Saudi Arabia to accept a huge American troop buildup, dubbed Desert Shield. This American presence would prevent Saddam from advancing beyond Kuwait into Saudi Arabia and would allow the US to launch a ground attack against Iraqi forces if and when the president determined it was determined such an attack was necessary.
Operations Desert Shield evolved into what would be called Operation Desert Storm, as the sanctions failed to dislodge Iraq from Kuwait, and skeptics in Congress came around. Bush secured UN support for military action and then persuaded Congress to approve the use of force to liberate Kuwait.
On January 17, 1991 the president unleashed a devastating aerial assault on Iraq. After 5 weeks of this, Bush gave the orders for the ground assault. It was led by General Schwarzkopf and the combined forces troops drove directly into Kuwait City.
In a controversial decision, President Bush, acting on the advice of General Colin Powell, chairman of the Joint Chiefs, halted the advance and agreed to an armistice with Iraq. Critics claimed that with just a few more days of fighting, they could have ended Saddam’s cruel regime.
Operation Desert Storm took Bush’s approval ratings to above 90%, higher than both Eisenhower and Kennedy. The US had deployed as many troops as they had in Vietnam but had lost just 146 lives. The price of oil fell. However, Saddam Hussein continued to rule in Iraq and tightened his grip on Iraq. The US suspected he possessed chemical, biological and nuclear weapons facilities.

Under President Boris Yeltsin, Russia struggled to reform its economy and to fight rampant corruption. In 2000, Yeltsin’s elected successor, Vladimir Putin, took office.
US relations with Russia were strained by Russia’s brutal repression of the civil war in Chechnya, by NATOs admittance of the Czech Republic, Hungary, and Poland and by Russia’s support of Serbia in the Balkan Wars in the 1990s.
Serbian leader Slobodan Milosevic had ended Kosovo’s autonomy within Yugoslavia and imposed Serbian rule even though 90% of the population was Albanian. The Kosovars launched a guerilla war against the Serbian police and Milosevic responded with a campaign of repression.  When diplomatic efforts failed, Clinton and the heads of NATO governments ordered an aerial assault in 1999. Milosevic stepped up the ethnic cleansing in response. Milosevic finally agreed to halt attempts to purge Kosovo of its Albanian inhabitants.
President Clinton used the US military to enforce international peace norms and to fight terrorists who threatened US interests at home and overseas. First, the US got involved—largely through air power—in the former Yugoslavia territory after ethnic cleansing occurred during a civil war between various ethnic and religious factions. He controversially did not intervene during the 1996 Rwandan genocide. Next, the US launched air strikes at al Qaeda training camps in Afghanistan and Sudan because Al Qaeda tried to blow up the World Trade Center in 1993, attacked two American embassies (Kenya and Tanzania), and attacked the USS Cole in 2000.