Overall, the weak factors within the Articles made many people feel as though the Articles of Confederation needed to be replaced by a set of laws with a more central authority and a federal government with enforcement power.

To review what could be done about the country's inability to overcome critical problems, George Washington hosted a conference at his home at Mt. Vernon, Virginia. Representatives agreed that the problems were serious enough to hold a meeting later in Annapolis, Maryland so that all the states could be represented. Only five states sent representatives to the Annapolis Convention, but those present agreed that a convention should be held in Philadelphia for the purpose of revising the Articles of Confederation.

Congress opted to dismantle the old Articles of Confederation and create a new set of laws. The biggest problem was analyzing how much power to give to each state in representation in Congress. 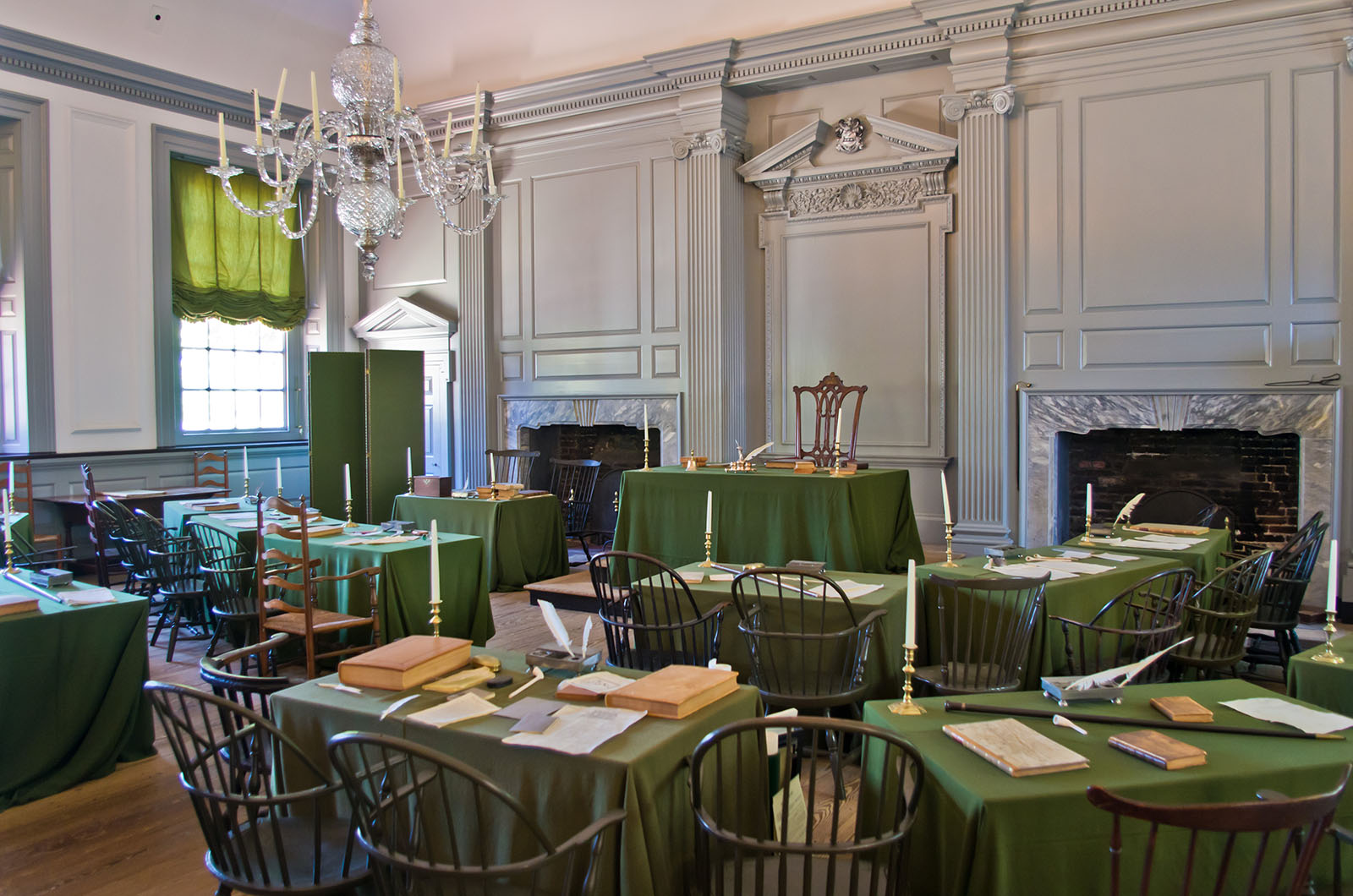 Delegates to the Constitutional Convention assembled, argued, and finally agreed in this room, styled in the same manner as during the Convention. Photograph of the Assembly Room, Independence Hall, Philadelphia, Pennsylvania. Wikimedia. Creative Commons Attribution-Share Alike 3.0 Unported.

Virginia created a plan that was drafted by James Madison called the Virginia Plan. This plan would give more populous states more power in Congress. By contrast, small New Jersey proposed the New Jersey Plan. This plan wanted one vote for each state, regardless of population.

After much debate, the Great (Connecticut) Compromise was negotiated and established a bicameral Congress. The House of Representatives (Virginia Plan) and the Senate (New Jersey Plan) each had equal representation in Congress but balanced the power of small and large states.

Other compromises were the creation of the Electoral College, the Three-Fifths Compromise and ending the slave trade in 1807. The Constitution was finished on September 17, 1787. However, the Constitution still needed to be ratified by nine of the states, which would not be easy.

Nine states were needed to vote in favor of ratifying the Constitution. Each state would hold special elections to select its members. Each member would be either a Federalist or an Antifederalist.

Delaware and Pennsylvania were the first two states to ratify in December of 1787. Massachusetts ratified only after the promise of a Bill of Rights to ensure the preservation of individual liberties. The Bill of Rights helped tipped the balance because it satisfied the antifederalists' concern that a federal government could infringe on citizen's rights. 🎥 Watch: APUSH - Hamilton v. Jefferson