States are governed through different political philosophies and on varied ends of the political spectrum, but the structure of governance can be divided into two main groups.

In a federal system, the local governments often control things like education or other cultural matters. Many federal states are large and multinational, so local power helps balance the needs of the people with the federal government there to offer larger protections and international relations.

Unitary states can be either democratic or undemocratic. For example, China is a unitary state that is more authoritarian than democratic and the central government holds all of the power. France, on the other hand, is a democratic country, but local governments have very little power in decision making. 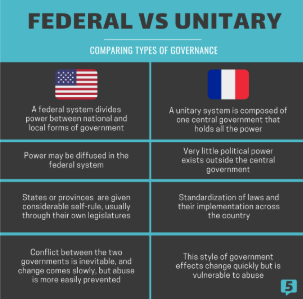 Related to the forms of government is the shape of states, or morphology. The physical shapes matter because it can bring about challenges in governing as people are distributed in different ways.

Compact states are where the distance from any boundary to the center is about the same distance. Some examples are Poland and Romania. Elongated states are stretched out and face difficulties to travel/communication. Some examples are Chile and Norway. Prorupted states are relatively compact and have an extension. Examples include Thailand and India. Perforated states have another state completely within its boundaries. For example, South Africa surrounds Lesotho and Italy surrounds Vatican City.

The world has become WAY more connected in the last century because of technology, global markets, and political influence. Globalization, or increased global trade, connections, and interactions, can challenge state sovereignty. Freer trade has decreased the importance of political borders. Globalization has also allowed ideas to spread fast, which leads to more independence movements, such as the Arab Spring, a pro-democracy movement that started out as small demonstrations but quickly escalated to region wide disturbance due to social media.

Supranationalism is when multiple countries form an organization to mutually benefit all member countries. Some common examples are the UN, NATO, NAFTA, and the EU.

Economic supranationalism is fundamentally the same thing, except it is geared towards economic benefit and trade. Some examples are the WTO, ASEAN, and OPEC.

Transnational companies span across countries, thus weakening state sovereignty. These include Google, Amazon, Facebook, and Apple. Economic supranationals can help revitalize a state's economy if a transnational decides to relocate production to a different state. Military & strategic supranationalism occurs when states work together as mutual defense allies. Some of these cross-country pacts are NATO and the Warsaw Pact.

Supranationalism has an impact on the environment and introduces challenges to states, transnationals, and supranationals. Transnational corporations are responsible for polluting the air, water, and soil of the developing countries where their factories are located. Eventually, this pollution and climate change will need a solution that includes every country.