6.6 Density and Land Use

Review on Measuring Population Density From Our Unit 2 Study Guide:

Arithmetic Density is calculated by dividing the total population by the total amount of land area.

Physiological Density is calculated by dividing the total population by the amount of arable land.

Agricultural Density is calculated by dividing the total amount of farmers by the amount of arable land.

Arithmetic Density is best for Urban Population Densities since it is measuring only people and land space. Urban areas do not have anything to do with land used for agriculture or arable land.

Residential buildings and designs of land use reflect a city’s culture, technological capabilities, and cycles of development. In the USA, creating suburbs is very common. Suburbs are an example of a lower‐density housing inside of these residential districts on the outskirts of a city. This area is also called the exurban area. This means that there is space reserved for a home‐owners, single‐family structures and also a yard. On the other  hand, in urban areas, we see higher‐density housing, with the majority of people renting apartments in a smaller space.

In Urban areas, land is usually not very available. Urban areas generally have very high population densities and are very packed with people! Residential buildings are often very high rent and cause people to have to find roommates and live in cheaper, poorer areas of cities. This causes people to live in small, cramped apartments with many roommates. In the early 1900s in New York City, many people on the Lower East Side lived in small tenements (usually less than 500 square feet) with sometimes more than 15-20 roommates that they had never met before. Tenements and slum housing is a problem for Urban Areas that is still a solution unsolved in many developing nations.

Below is a picture of the Bid-Rent Curve. It is an economic theory that attempts to explain the price the people will pay for different land at differing distances from the Central Business District. 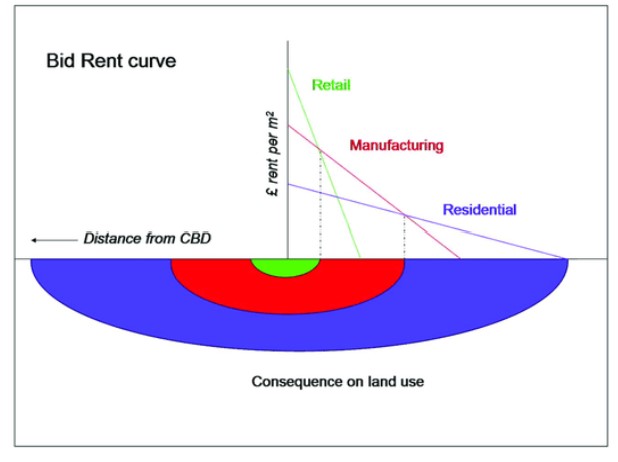