Geopolitics describes how geography affects politics and the relations between states. For all of human history, there is always a struggle to maintain territories, build alliances, and ultimately maintain a strong defense. It’s no different than today. Every state works with other states in alliances or as rivals.

Territoriality occurs when people want to control land to exert their influence over people. It is a concept fundamental to many historical events. At its most basic level, territoriality is about who controls what, which applies to small and large areas of land.

But, why do some states grow while others stay weak? There are some theories that aim to explain this.

The Organic Theory (Ratzel) says that states need living space to survive, which leads to the annexation of lands from weaker states. Ratzel was a biologist and heavily influenced by Darwin and the theory of natural selection. In political geography, this meant every state needed living room, or lebensraum, to survive. The strongest states would expand while the weakest states would be absorbed and that was the natural flow. Hitler himself used this theory to justify annexing Austria and Czechoslovakia.

The Heartland Theory (Mackinder) states that land-based power led to domination. Whoever controlled the “heartland” (Russia, Central Asia, Eastern Europe), would dominate the world. He reasoned that this land created the perfect conditions for power. By the 1800s, transportation across the land was greatly improved and could provide quick transportation of troops. Also there were vast natural resources available such as coal and because it was landlocked it was protected from naval attacks. And finally, the vastness of the land meant huge populations of people that could operate a roaring economy,

In direct contrast, the Rimland Theory (Spykman) claims that whoever controlled the seas and maritime areas (coastal regions across Europe and Asia) would rule the world. Spykman valued the seas more than Mackinder did and theorized that control of the coasts was more powerful than the “heartland” could ever be. 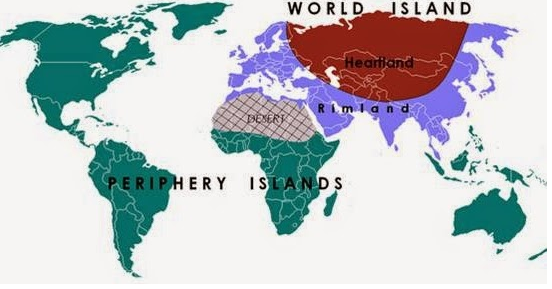 Territoriality is more complicated than just maps. It’s easy to draw lines on a map and mark territory, but these lines are oftentimes not as well defined in real life. For example, the people may not agree with the boundaries or other states may not recognize them.