Join us on May 3, 2021 for the 🌶️ AP Human Geography Cram Finale for a last minute review to get all your questions answered!

Sex ratio is the number of males per one hundred females in the population. That and age structure are analyzed and mapped in regions around the world. In the developed world there are more women than men.
This is because the life expectancy is longer for women than men in every country. This is because men tend to have jobs with higher mortality rates (construction, police, military). Men are at higher risks of heart disease.
Men also die in accidents more often.
In the developing world, there are more men because male babies are preferred. In India, it is illegal to find out the sex of the baby in utero, because of so many abortions of female fetuses. In China, there are now millions more men than women in their childbearing years, because during the one-child policy male babies were strongly preferred.
➕ China's woman shortage creates an international problem
➕ Indian police raid illegal ultrasound centers to save unborn girls

Patterns of people at various ages vary in different regions within countries. Cities with large universities have an inordinate number of people aged 15-24. Parts of Florida and Arizona with large retirement communities have a high percentage of people 60 and older.
In some countries you will find an extremely high number of men between their 20s and 50s, because of so many migrant workers coming in for employment opportunities.

The most important tool in measuring sex ratio and age structure is the population pyramid, which is a bar graph that represents the distribution of population by sex and age. Population pyramids use five year increments of age and separate males on the left and females on the right (women are always right!)
This can show you if there is a high or low dependency ratio, more females or males, or a high percentage of young or old.
What can you learn from population pyramids?
This is very handy when analyzing a country’s stage in the demographic transition model (DTM). It is the process of change in a society’s population from a condition of high crude birth and crude death rates, and low rates of natural increase, to a condition of low crude birth and crude death rates, low rate of natural increase, and higher total population. 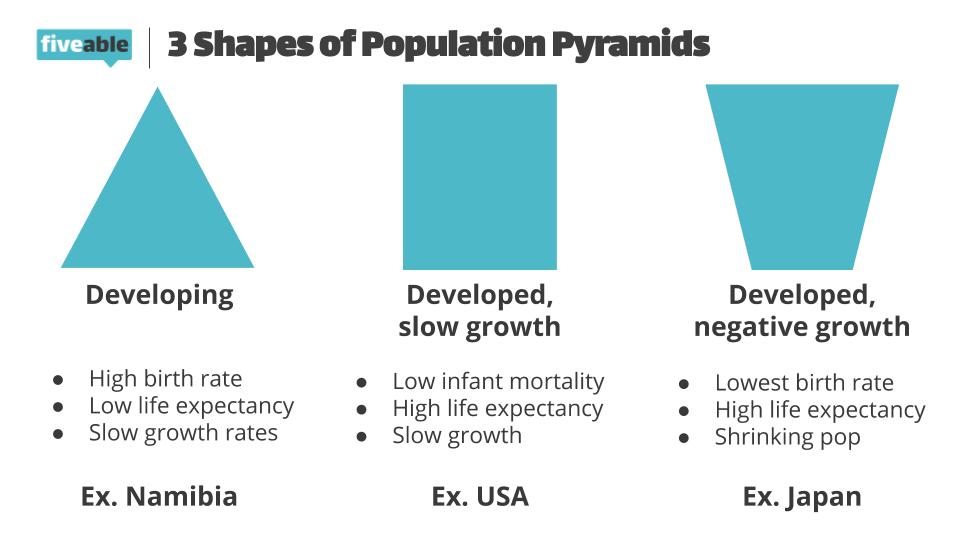 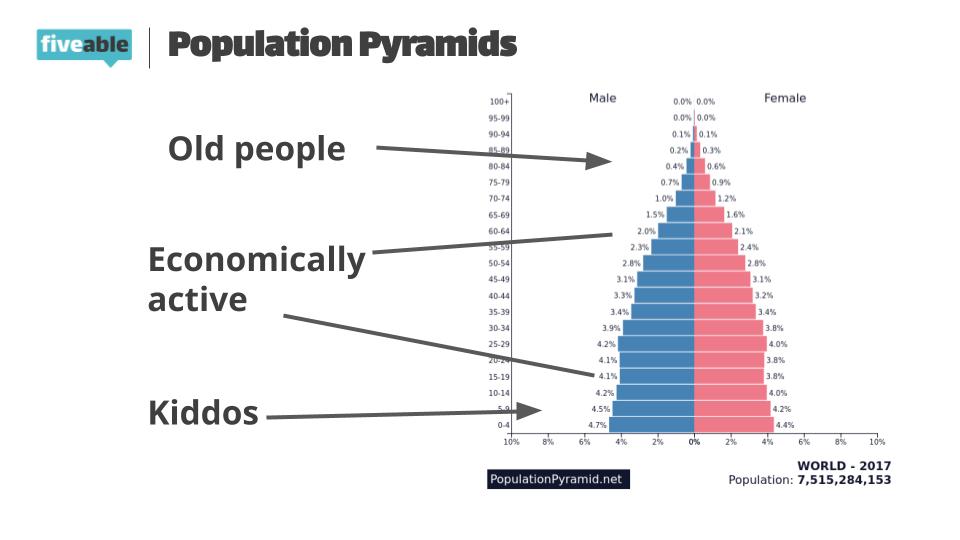 💪🏽 Are you ready for the AP HuG exam?

Thousands of students are studying with us for the AP Human Geography exam.
join now