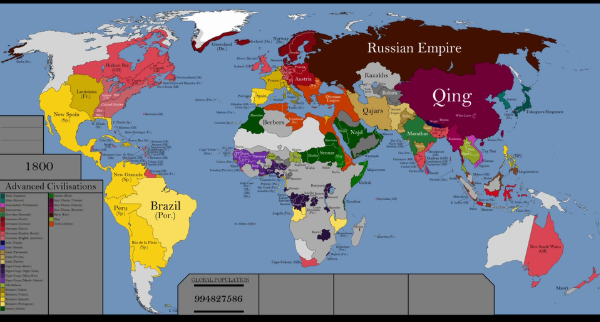 So how did we go from that to what we have now? Well, it was a messy process as there are forces at play which can unify or break-up countries.

The idea that nations could establish an independent country is not all that old. In the 1600s, during the Enlightenment, nationalism was first theorized. Nationalism is a nation’s desire to create and maintain its own state. This is the spark that leads to an independent nation state. Although too much of it can also be detrimental to a state and can lead to never ending wars, as we saw in the 19th and 20th centuries.

Throughout history, the political map was vastly altered because of imperialism. Imperialism is a more broad term that includes any time a country is exerting influence over another country. This could be politically, culturally, or economically. States are motivated to practice imperialism for two reasons - materials and markets. Imperialism increases access to natural resources and creates new markets to sell goods.

Colonialism is a type of imperialism where people move into and settle on the land of another country. The Europeans began practicing colonialism in the 1500s and expanded rapidly until much of the world was colonized by Europeans.

Spain and Portugal kicked things off in the 1500s by establishing empires in Central and South America for “God, Glory, and Gold.” England, France, and the Netherlands followed, mostly colonizing different territories in North America. The early Europeans fought each other frequently for more dominance across the Americas straight through the 1800s.

In the late 1800s, Germany, Belgium, Italy, and others joined the game, setting their sights on Africa and Asia to catch up with their European competitors. By the end of the 1800s, all of Europe turned to Africa and European leaders met at the Berlin Conference (without any African leaders present) to divide up the continent. They didn’t pay any attention to tribal and traditional boundaries, and instead, completely redrew country borders however they wanted.

Here’s what Africa looked like before and after the Berlin Conference. Notice how afterwards, only Ethiopia and Liberia remained independent. Keep in mind that native Africans lived across the continent before Europeans arrived and they had established centuries of flourishing empires, culture, and societies. European colonization changed all of that. 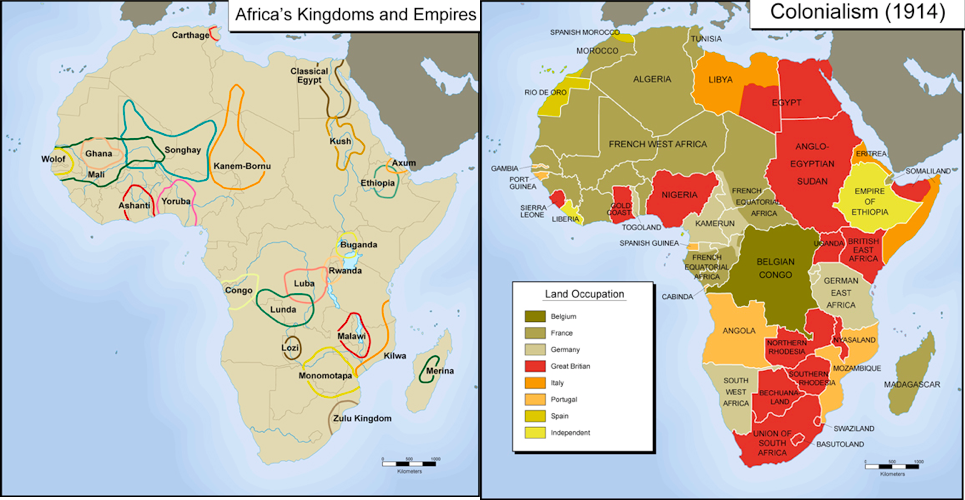 Both World Wars led to drastic changes in the political map. After World War I, new states were carved out of the losing belligerents including the Ottoman Empire, Austria-Hungary, and Germany. Rising nationalism also triggered independence in other countries at the same time including Ireland from the United Kingdom and Latvia, Estonia, and Lithuania from Russia.

During World War II, the rapid expansion of the Nazis and Imperial Japan changed the maps of Europe and Asia. As soon as both powers were defeated in 1945, their short lived empires were broken up or occupied by other states. For example, the states of Eastern Europe went from Nazi occupation to Soviet control and remained part of the Soviet Union until 1991.

During the Cold War (1945-1991), the superpowers of the United States and the Soviet Union competed for influence all over the world. The US focused on economic imperialism in Latin America and adopted old colonies as new states including Hawaii and Alaska. Meanwhile, the Soviets were pressing into Asia, which prompted the US to fight back. Proxy Wars were fought in Korea, Vietnam, and Afghanistan as the superpowers fought each other through the peoples of these countries.

The end of World War II also ushered in an era of decolonization. States under colonization fought for their independence from the moment they were occupied. But the World Wars stalled any independence efforts and the colonized nations were forced to join their colonizers in the fight. This is what made these wars global in the first place. Australians, Indians, Brazilians, and Egyptians found themselves entangled in the web of alliances.

After World War II, the independence movements recommenced almost immediately. The European nations were severely weakened from the war and did not have the resources to retain control over their colonies. Some countries like France fought hard to hang on to colonies, but Vietnam, Indonesia, and Algeria fought back and won their independence.

The British were in ruins after the war and agreed to a peaceful independence for India and Israel. However, both countries were quickly thrown into violent conflict as India was partitioned to also create Pakistan and as Israel was attacked by every surrounding country.

In the 1990s, the Soviet Union collapsed, which led to the independence of 15 new countries in a single year. The quick shift of power was actually peaceful because the Soviets were so weakened by the costly war against Afghanistan that they had fought for a decade.

The geopolitical forces of nationalism and imperialism changed the map dramatically in the last two hundred years and both of these forces continue to affect current issues. Within the next century, the map will surely change further as more countries gain independence.