Join us on May 3, 2021 for the 🌶️ AP Human Geography Cram Finale for a last minute review to get all your questions answered!

A greying population can be signs of trouble:
A number of countries have a high percentage of people that are in or near retirement age (60 or older). This can happen for a number of reasons and have some serious consequences in those regions. 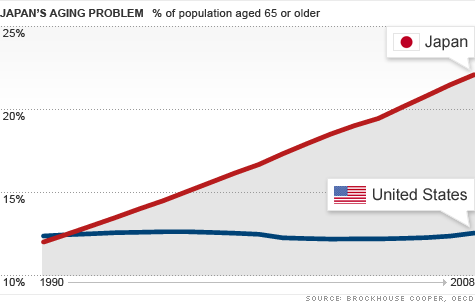 Countries that are in stage four and five of the demographic transition model have lower birth rates, but higher death rates than countries in stages two and three. Less people are in their childbearing years. These countries tend to have more women who are educated. For these reasons the birth rates are lower.
With better health care more people are living into their 70s and 80s, but this causes the death rate to rise, because of the large number of older people. When these countries are in stage five of the DTM, they have a negative natural increase rate, which means their populations are decreasing.
Countries that are in stage four and five are more developed and therefore have long life expectancies.

There are also social consequences. Besides health care, things like housing for the older generations need to be addressed. Countries with older populations need to invest in retirement homes and have more people to help care for the elderly.
Family compositions can change, too, as sons and daughters need to help pay for and/or care for their older parents. This can lead to severe economic consequences as well.

Lastly, there are economic consequences. With more older people and lower birth rates, you have less people in the workforce. This can lead to lower production, which will lead to less money being made. That is doubly bad when you consider how many people will have to use part of that money caring for the elderly family members.
With the government spending more money on taking care of older people, less money will be spent in other areas - education, technology, innovation, arts, etc.
🎥 Watch: AP HUG - Population Pyramids

💪🏽 Are you ready for the AP HuG exam?

Thousands of students are studying with us for the AP Human Geography exam.
join now