New technologies, especially from the 2nd Agricultural Revolution, from the new availability of natural resources, fueled Industrialization. People were rural before the Industrial Revolution, but they migrated to cities for jobs in factories. These new urban jobs changed current social class structures and created new social stratification. Food supplies increased in cities and led to booming population growth.

Production in factories was powered because of new technological developments. Ford Process was created for efficiency in factories by delegating specific jobs to specific workers (assembly line) for every product produced. Interchangeable parts mean that each part could be replaced without replacing the whole product.

Waterways, like rivers, especially in the UK, were near where factories were built originally after moving away from Cottage Industry Style factories.

The Industrial Revolution began in Britain mainly because of the abundance of coal. Liverpool and Manchester were the major early Industrial Cities in the UK. Also, the location makes it easy to import raw materials and export finished goods to and from France and other railroad countries in Northwestern Europe. Mercantilism helped England to get Raw Materials from colonies that other European powers did not have access to. This caused Imperialism and Colonialism to grow in other European Powers.

Industrialization happens because of the growth of large scale manufacturing economic activities in a region. It can usually lead to favoring commercial farming over subsistence. With the growth of coal manufacturing, water power was not as important in the location of factories as much as new raw materials (like coal). Coal powered most new factories as Industrialization diffused into NW Mainland Europe and the Americas, like in Ohio & Pennsylvania.

Watch this video here for more on industrialization. 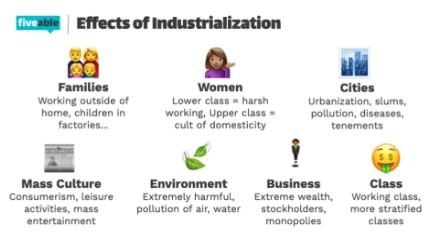