The role of women in society varies in different parts of the world:

In the developed world women are more educated, are a larger part of the workforce, there is better health care and more access to contraception. Because of this total fertility rates are much lower - usually around 2.0. Women can typically choose if and when to have children.

In the developing world, the opposite is true. Women are less educated, do not work outside of the household, health care is worse and there is less access to contraception. Because of this total fertility rates are much higher. In Sub-Saharan Africa rates are higher than 5.0.

Social roles vary based on gender in the developed and developing world. In the developed world, both men and women help provide for children at home. Because of careers and access to contraception women can typically choose if and when to have children.

Planned pregnancies are the norm, even though not all are done this way. With better healthcare women can also choose to have the baby or to have an abortion. Better prenatal and postnatal care means much lower maternal and infant mortality rates. This leads to lower total fertility rates.

In the developing world women are usually expected to stay home and take care of children. They are usually not expected to work, unless it is subsistence farming, which is close to the home. Contraception is not widely available so planned pregnancies are not the norm.

The healthcare systems are not as good, with less prenatal and postnatal care. Therefore maternal mortality and infant mortality rates are higher. This leads to higher total fertility rates.

Economic roles also vary in the developed and developing world. In the developed world women are a large part of the workforce. So, having more children is a detriment, because it is more difficult to balance a job with lots of childcare duties. These parts of the world also tend to be more urbanized, which leads to smaller families as well. Houses in cities tend to have smaller living space.

In the developing world women tend not to work outside of family farms, or in the household. If there is subsistence farming more children can be a benefit, because they can help work the fields. These parts of the world are more rural. Although the living quarters are not large, women still tend to have more babies.

Political roles vary by development as well. In the developed world, women have a larger role in society. Besides having positions in government, they are a large part of the workforce and have the same rights and responsibilities as men.

They can vote, hold public office, get an education, and speak out for their rights. Because of this women’s rights are more important to all politicians. For these reasons the total fertility rates are lower. 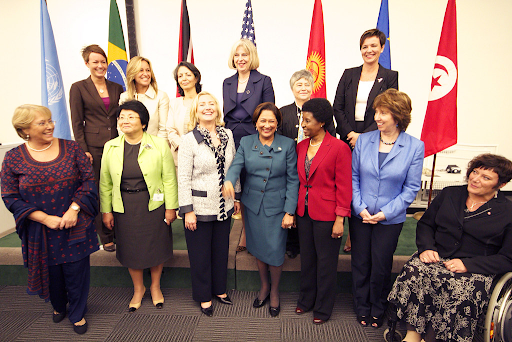 In the developing world women do NOT have much of a voice. In some countries women cannot vote, or do not participate in the political process. For example, women in Saudi Arabia did not get the right to drive until 2018! Women are also less educated and not expected to work. This leads to higher total fertility rates.