Transduction is the conversion of a signal into a cellular response. Transduction occurs in one step but the majority of the time it takes multiple changes.

Memory Tip: A good way to think about the signal transduction pathway is like a waterfall or a line of falling dominoes.

Regardless of the distance between the cells, cell communication always follows the same 3 steps: reception, transduction, and response.

Reception occurs when the signal (can be a chemical, peptide, or protein) is detected when the ligand (signaling molecule) binds to the receptor protein in a target cell. This causes a change in the shape of the cytoplasm of the inside of the receptor. Then, transduction occurs. In transduction, the signal is transmitted through the cell and is amplified. Finally, the third step is the response. The response is when the signal is carried out. An example of a response is when the cell activates RNA polymerase which leads to the transcription of a gene. 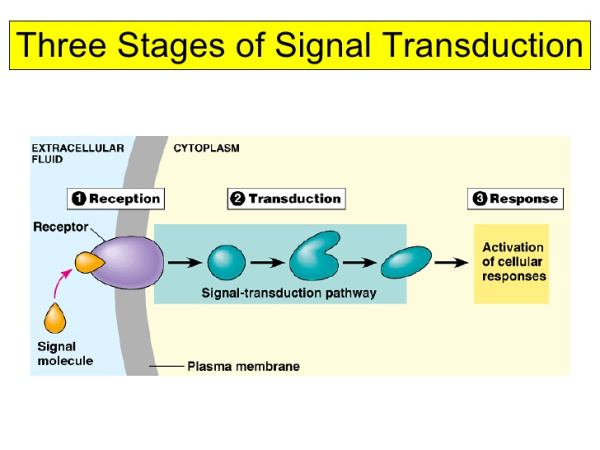 The phospholipid bilayer is very important because it creates a barrier between the inside and outside of the cell.

Ion Channel Receptors involves a channel that opens and closes. The channel is used to allow the passage of ions across the membrane.

G-Protein-Coupled Receptors: Through this process, the ligand binds to the outside part of the cell and changes the form of the inside cytoplasm. This causes a G protein to bind and activate the enzyme adenylyl cyclase. Adenylyl cyclase converts ATP (energy) to cyclic-AMP.

Finally, cyclic-AMP activates other molecules inside the cell which finally leads to the cellular response.

Transduction has a link to evolution

Since transduction occurs in an animal, bacterial, plant, and yeast cells, it shows that the signal transduction pathway has evolved from a common ancestor.

Isn’t it crazy that all these different organisms could have something in common?!

Practice your typing skills while reading Introduction to Signal Transduction