Photosynthesis is a chemical process with the following equation: H2O + CO2 → C6H12O6 + O2. Both plants and photosynthetic bacteria are capable of this complex conversion process. The overall reaction is spurred by the energy from a photon of light striking a pigment in the chloroplast.
Photosynthesis is broken down into two major steps which are dependent on one another: light-dependent reactions and light-independent reactions (Calvin Cycle). Both of these processes occur in the chloroplast of a photosynthetic organism. 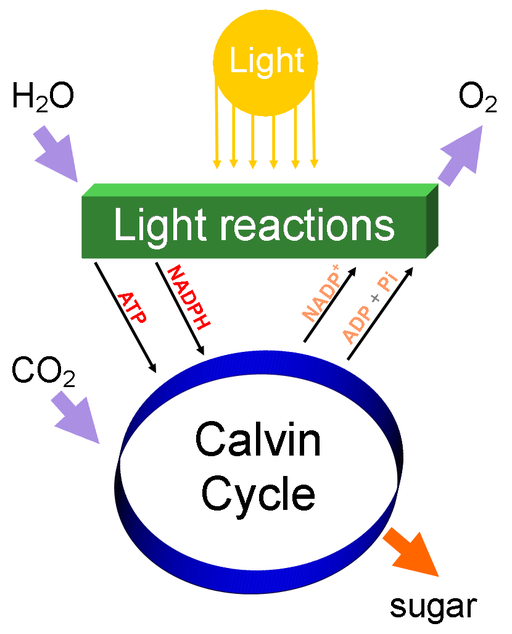 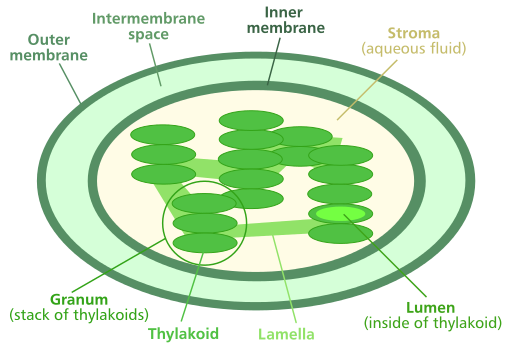 When light strikes the chloroplast, an electron from a molecule of chlorophyll is excited and travels through the electron transport chain. In the process, a concentration gradient of hydrogen ions is formed. This will be used later to produce ATP through ATP synthase. The electron lost from chlorophyll is replaced by an electron from water. This creates more hydrogen ions and the production of oxygen, which is released from the plant.

Lastly, the concentration gradient of hydrogen formed via the Electron Transport Chain allows for the process of chemiosmosis. This process relies on the flow of hydrogen through ATP synthase to provide the energy to phosphorylate or add a phosphate group to adenosine diphosphate (ADP) in order to create adenosine triphosphate (ATP).
Other electrons are lost from chlorophyll and bind to an electron carrier, such as NADPH. Electron carriers transport electrons in the form of a hydrogen ion. These electrons can then be used in other processes. In this case, the electrons will be used to form bonds in the Calvin Cycle.

The light-independent reactions are named due to the fact that they do not require light in order to proceed. This set of reactions is also referred to as the Calvin Cycle. These reactions take place in the stroma of the chloroplast, or the gooey space in between the thylakoid pancakes.
In the Calvin Cycle, carbon dioxide is converted into an organic carbon source, most often modeled by glucose. The first step of this reaction involves the enzyme ribulose bisphosphate carboxylase, abbreviated as rubisco. This enzyme is responsible for carbon fixation, taking carbon dioxide from the air and converting it into an organic, usable form.
After carbon dioxide has been fixed, the process begins to convert it into glucose. This involves the creation of a lot of bonds. In order to make bonds, electrons and energy are required. This is where the electron carriers and ATP from the light-dependent reactions come into play.
By using the energy from ATP and the electrons from the electron carriers, a number of enzymes are able to convert organic carbon into glyceraldehyde-3-phosphate, or G3P. G3P is a precursor for a number of carbohydrates such as starch, cellulose, and glucose. The cell can use this to create a number of important energy and structural components. 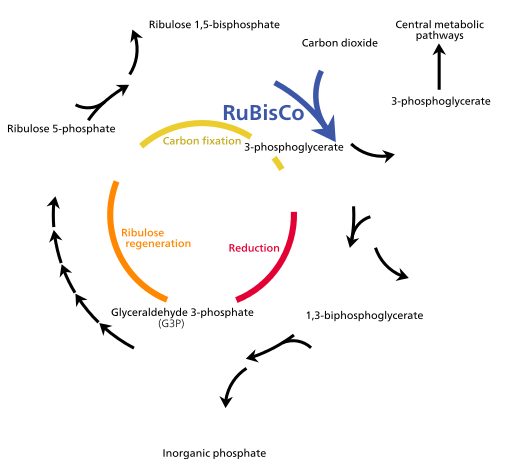