*Genes are a specific unit of inheritance that program the amino acid sequences of a polypeptide. Genes are made of genetic material called DNA.

DNA directs its own replication, causes the synthesis of messenger RNA (mRNA), and using mRNA controls protein synthesis. The sugar in DNA is deoxyribose; in RNA it is ribose. In RNA, thymine is replaced by uracil (U), so the base pair is Adenine (A) to Uracil (U).

Nucleic acids have a linear sequence of nucleotides that have ended, defined by the -OH (Hydroxyl group) on the 3’ carbon of one nucleotide and the phosphate sugar on the 5’ carbon of the next nucleotide. During DNA and RNA synthesis, nucleotides are added to the 3’ end of the growing strand, causing covalent bonds to form between adjacent nucleotides. 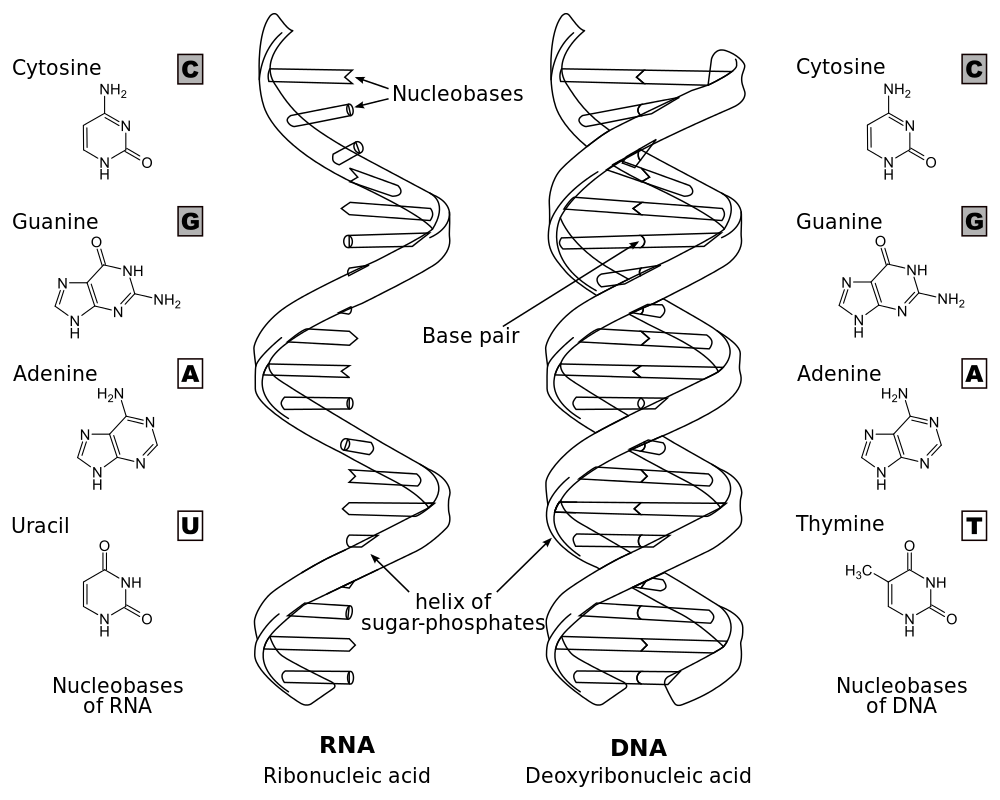 The nitrogenous bases in nucleic acids are called cytosine (C), thymine (T), uracil (U), adenine (A), and guanine (G). Uracil is only found in RNA and thymine is only found in DNA. Two types of nitrogenous bases are Purines and Pyrimidines. Purines include Adenine (A) and Guanine (G) that contain a double ring structure. The Pyrimidines are Thymine (T), Cytosine (C), and Uracil (U) that contain a single ring structure.

Base pairing rules of purines and pyrimidines

DNA is arranged in a double helix made of two strands of nucleotides held together by hydrogen bonds. Each strand of DNA consists of a sugar-phosphate backbone that keeps the nucleotides connected with the strand. RNA (ribonucleic acid) tends to be single-stranded, yet also has a sugar-phosphate backbone. The three types of RNA you should know: mRNA (messenger RNA), tRNA (transfer RNA), and rRNA (ribosomal RNA).

A prime (ʹ) identifies the carbon atoms in the ribose, such as the 2ʹ carbon or 5ʹ carbon. DNA is structured as an antiparallel double helix, with each strand running in opposite 5’ to 3’ orientation, and the 5’ end of one molecule is paired with the 3’ end of the other molecule and vice versa.