Translation requires energy and goes through a process of sequential events: initiation, elongation, and termination. 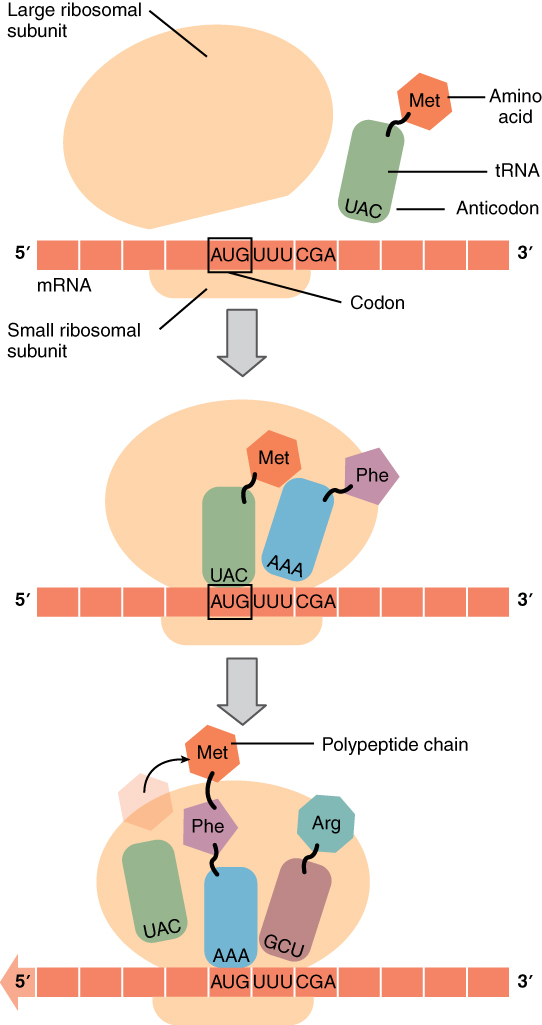 Initiation occurs when the rRNA in the ribosome interacts with the mRNA at the start codon.

The sequence of nucleotides is read in groups of three, which are called codons. The converse of the codons is subsequently called anticodons. Each codon correlates to a specific amino acid, though an amino acid can have more than one signifying codon. It is important to note that nearly all living organisms use this genetic code, which is evidence for the common ancestry of all living organisms.

tRNA brings the amino acid as specified by the mRNA codons. The created chain of amino acids becomes what is called a polypeptide chain. The polypeptides interact with each other’s chemical elements to form a protein.

The polypeptide chain continues to grow until a stop codon is reached, which then terminates the process and release the polypeptide chain/newly formed protein.  Retroviruses utilize this process differently. The genetic information starts as RNA and is converted into DNA (through reverse transcriptase). The DNA is then inserted into the host genome by the retrovirus, which is transcribed and translated for the creation of new viral progeny.