Crossing over is an incredibly important process that takes place during the first round of cellular division in meiosis.

During the process of crossing over, homologous chromosomes exchange parts of their chromosome at the same location, therefore, not adding or subtracting genes, just exchanging versions of the gene.

A more specific example of crossing over is shown below:

This exchange of genetic material leads to numerous possibilities for the separation of chromosomes and the resulting daughter cells. This can also be seen at the end of the diagram shown in section 1.

Depending on the original orientation of these chromosomes, different daughter cells will form. This can be shown by the four unique combinations of chromosomes shown in the row of gametes. 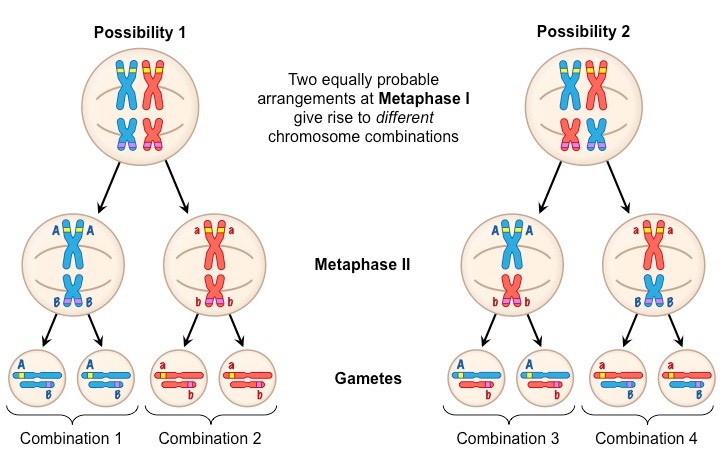 The random alignment of chromosomes during metaphase contributes to an immense amount of variation. The amount can be quantified using the following formula:

For humans, independent assortment results in 2^23, or 8,388,608, unique egg or sperm that one individual can produce. This does not include the variation that crossing over and random fertilization contribute as well.

Random fertilization simply means that there is a random chance that each egg and sperm will join one another. There are potentially thousands of sperm that can fertilize the one mature egg, and the genetics in each of them is distinct. The specific sperm that joins the specific egg for each fertilization is random, meaning that the same two parents are not going to produce the same child twice.