The membrane allows for various types of transport, shown below. Each type will be discussed as well as whether or not energy is required for transport to take place. 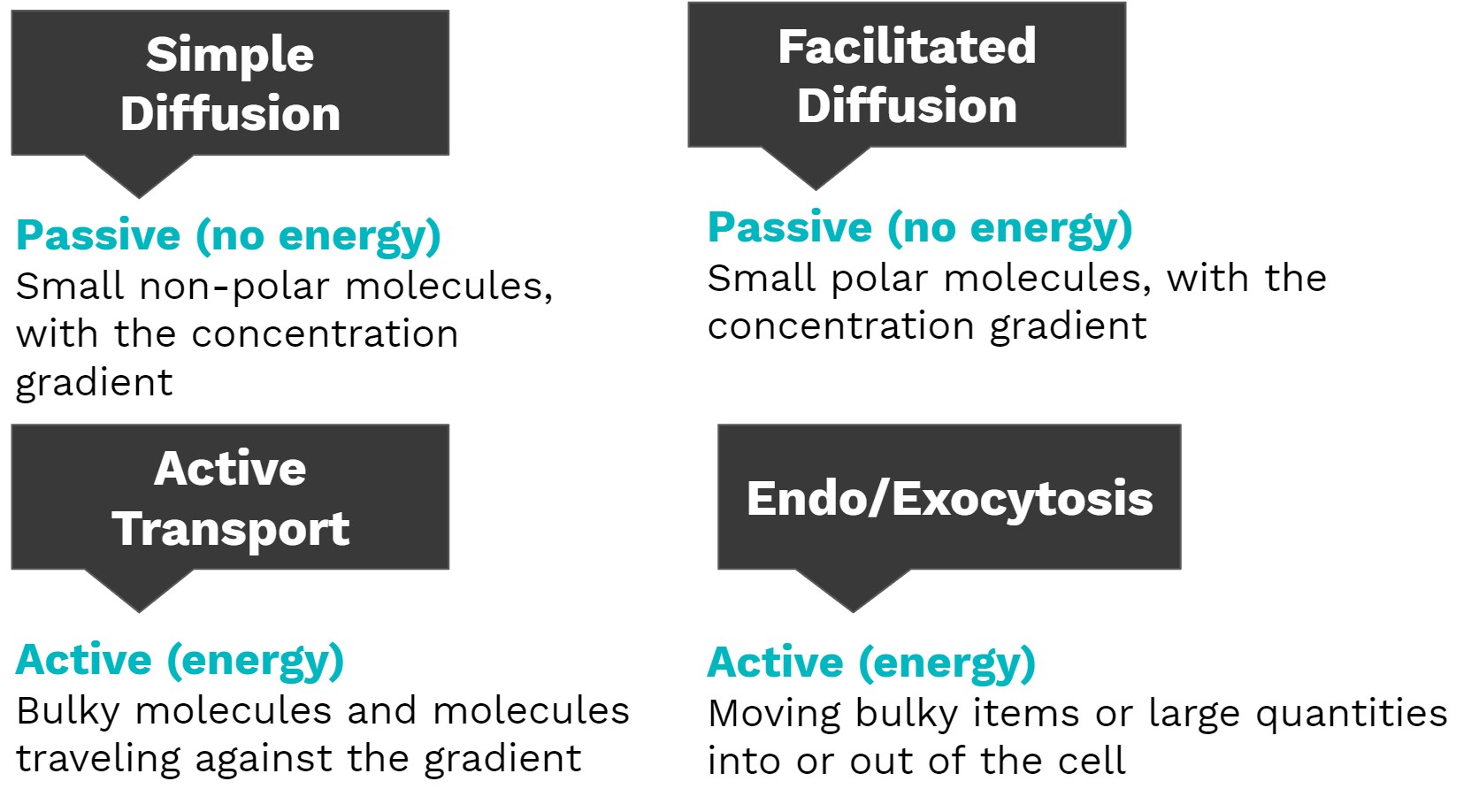 Simple diffusion is a passive movement of a substance from an area of higher to lower concentration. With no energy needed, a substance will diffuse down its concentration gradient, until equilibrium occurs. This is called passive transport.

Passive transport plays a large role in getting rid of wastes, and importing needed materials. Carbon dioxide and oxygen gas frequently rely on simple diffusion in order to enter and exit the cell membrane.

Facilitated diffusion is also a passive movement of a substance from an area of higher to lower concentration. No energy is required for this movement, but a transport protein is needed in order for the substance to get across the membrane.

This is used by small polar molecules who cannot get across the membrane without a transport protein. When water utilizes facilitated diffusion, it is called osmosis.

Active transport may also be used for large or bulky molecules or to transport large quantities of small molecules. These processes are referred to as exocytosis and endocytosis.

When a large amount of molecules are entering a cell it is called endocytosis. In this there are 3 kinds of endocytosis. In phagocytosis, the cell engulfs a large molecule, and brings it into the cell. These are generally food vacuoles.

The next kind is pinocytosis. The cell “gulps” surrounding solutes into small vesicles that are covered in a layer of protein.

The final kind is receptor-mediated endocytosis. In this, a receptor binds to a cell. When solute binds to the receptor, the plasmid pulls away creating a vesicle with the solutes. 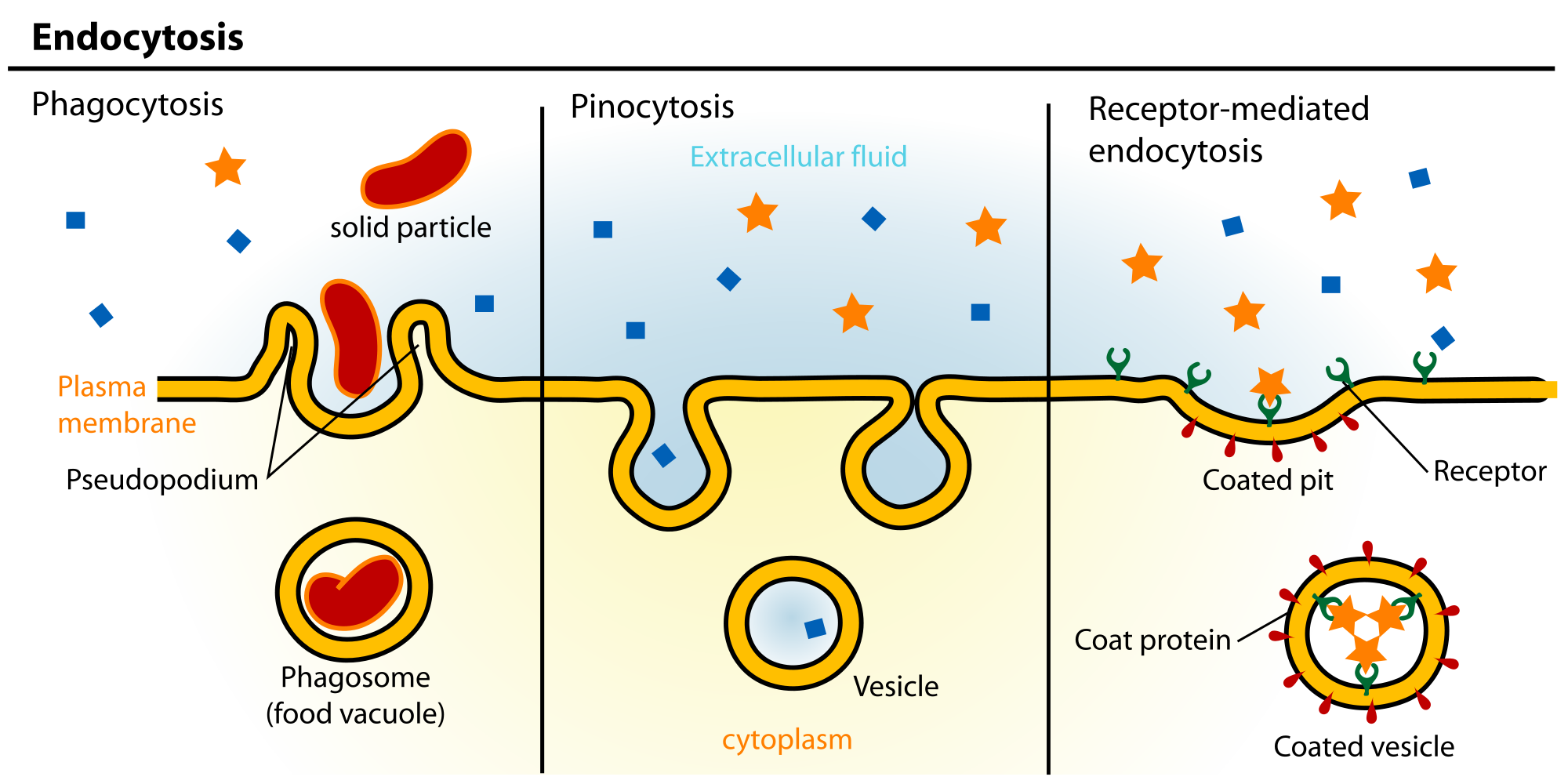 When molecules are secreted from the cell, it is called exocytosis. A transport vesicle from the Golgi apparatus moves along the microtubules in the cell until it reaches the plasma membrane. Then the vesicle fuses with the Plasma membrane, releasing the contents out of the cell. 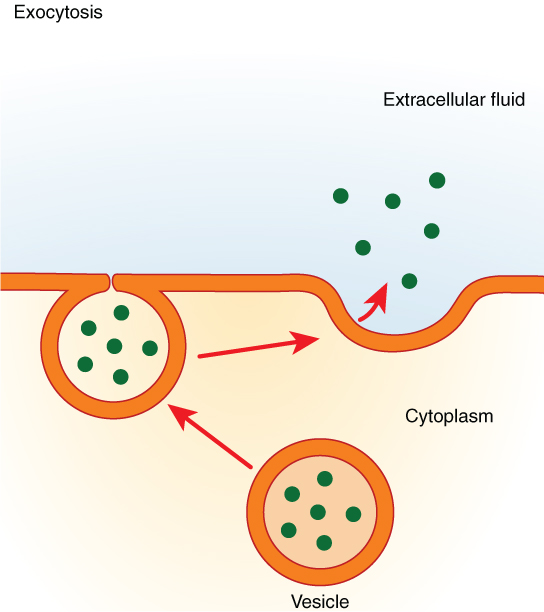