There are multiple sources of evidence to support evolution. Scientists have been able to date recovered fossils using a variety of methods. They can approximate the age of the rock surrounding the fossil to get a good idea of what era the fossil is from, use relevant geographical data (compared to other fossils found nearby), and even look at the decay of certain isotopes. These methods support evolution by providing ideas of what common ancestors may have looked like, how previous ecosystems may have functioned, and more.

Evidence of evolution can be found in today’s animals as well. There are structures that have actually lost their function due to evolution. One great example of this is the human appendix. Nowadays, it doesn’t really serve a function to our digestive system, and we only ever hear about it when it gets infected.

However, it is commonly believed that it did once serve a purpose. This is an example of a vestigial structure. Other examples would include wisdom teeth, human body hair, our tailbone, and wings on flightless birds.

Another similar evolutionary phenomenon would be homologous structures. These are structures or organs that may have similar functions or structures and suggest a connection to a common ancestor. The picture to the left compares the bone structure of the human arm to legs of a dog and a bird, and then a whale’s flipper. While the structures are not exactly identical, there are similarities in it, and each of these overall serve a similar purpose.

There is evidence on a molecular level as well. In fact, DNA nucleotide sequences and/or protein amino acid sequences have been compared for similarity. These sequences can be used to help determine if two species shared a common ancestor, and if so, what that species may have been as well.

Even further, all organisms have the same genetic material (DNA), similar genetic codes, same amino acids, and very similar processes for DNA replication as well. It is not merely a coincidence that all living beings have this much in common, and has been used to support the theory of evolution. 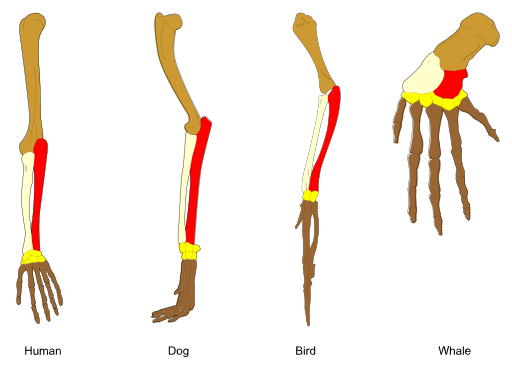