7.5 Carrying Out a Test for a Population Mean

When calculating a t-score, we use the general formula for critical values:

When we specify this formula for a t-score, we get the following:

Ricardo weighs all of the oranges in his bag and finds that they have an average of 4.65 oz with a standard deviation of 0.8 oz.

We will then need to reference our t-score chart to calculate our p value.

First, lets determine the degrees of freedom, which is always one less than our sample size. 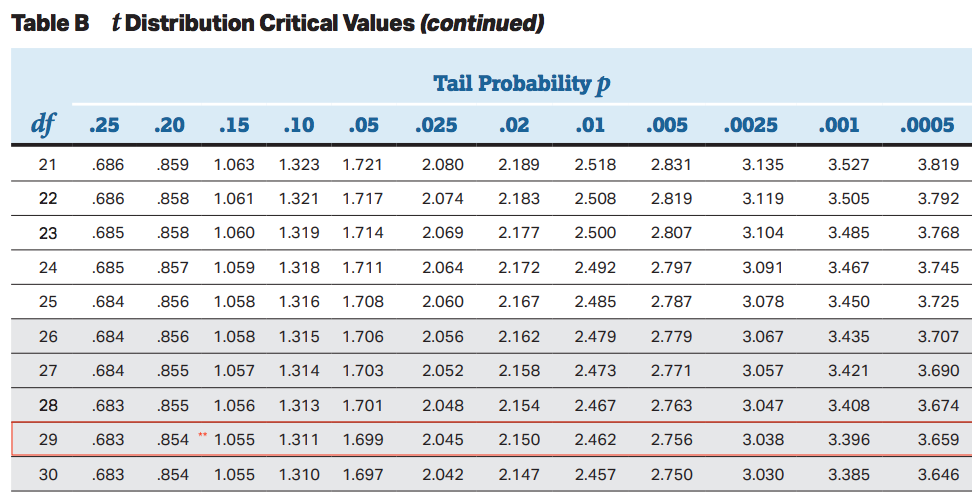 If we are doing a one tailed test, this is our p-value.

If we are doing a two tailed test, we would double this to get 0.3 for our p-value (since the t curve is symmetric and tail probabilities are equal).

Perhaps a much easier way to perform a one sample t test would be to use technology such as a graphing calculator. The most commonly used calculator for AP Statistics is the Texas Instruments TI-84.

When performing a one sample t test, you will first enter into the stats menu:

Then, you will navigate over to tests and select option 2:

You are then given two options: you can enter the given sample statistics or let the calculator use data points entered in Lists to calculate your necessary test statistic and p value. We will proceed with our example using Ricardo's 🍊s.

Once you press calculate, it gives you your test statistic and p value. Both of these things are essential to list out in your written response to receive full credit on the AP exam. Also, it is important for a t-test for population mean to include your degrees of freedom, even though it is not listed in the computer output for the test.

We NEVER "accept" a null or alternate hypothesis.