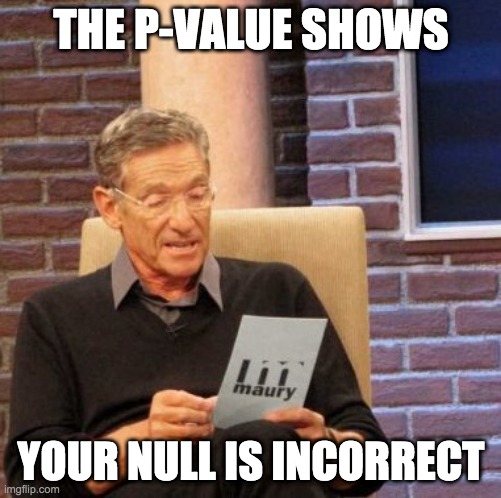 A p-value for a significance test is the proportion of possible samples of a given size that are equal to or less than/greater than our given sample. This probability is computed with the belief that the hypothesized value in the null hypothesis is true. In essence, the p-value is the probability of obtaining that given sample.

How do we interpret a p-value?🤷

If our p-value is low, this means that it is highly unlikely that our sample would be chosen randomly. This could be due to one of three things:

To be sure that this didn't occur by random chance, we should maybe check 2 or 3 random samples. If we get the same result each time, the consistency leads us to believe we are up to something (no one wins the lottery three times in a row). To be sure it isn't sampling bias, we make sure we have random samples. If both of those are met, there must be a problem with null hypothesis value.

In the recent issue of Sports Unlimited, Jackie reads that a right-handed hockey player scores on approximately 5% of their shots. To test this claim, Jackie watches 15 random hockey games and records 921 shots from random, right-handed hockey players. She finds that they scored on 60 of those shots. After calculating her z-score and p-value, she finds that her p-value is essentially 0.017. Interpret this p value.

This p-value means that of all possible samples of 921 shots from right handed players, approximately 1.7% of those samples would have at least 60 shots. This sample was random from the given information, so no obvious sampling bias. It could be that Jackie just hit the jackpot and watched the right players to have such a high goal scoring percentage. She could check this by redoing the experiment a few times. The other option is that the 5% isn't actually correct. Maybe that hypothesized percentage is a bit higher...🤔

Get your ap stats survival pack!

Download our ap stats survival pack and get access to every resource you need to get a 5.