To avoid the effects of bias on your data, the best method of implementing a study is by using random sampling in which a chance process is used to determine which members of a population are included in the sample.

Examples of Methods that Battle Bias 📃:

Simple Random Sample (SRS) chooses a sample size “n” in a way that a group of individuals in the population has an equal chance to be selected as the sample.

Steps to choose an SRS using a TI-84 Calculator:

*It is important to indicate when you conduct an SRS without replacement in your answer since selections are often made with replacement. In simpler terms, without replacement means once an individual is chosen for a sample, the number or label cannot be chosen again.  📚Strata are groups of individuals in a population who share characteristics thought to be associated with the variables being measured in a study. Stratified Random Sample selects a sample by choosing an SRS from each stratum and combining the SRSs into one overall sample. This method works best when the individuals within each stratum are similar depending on the variable being measured and when there are large differences between each stratum. *Stratified random samples reduce variability in the data and give more precise results. 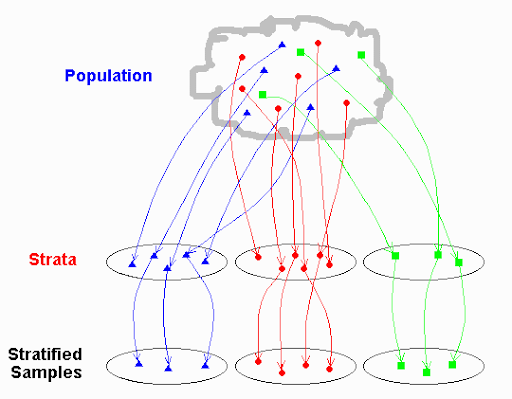 A cluster is a group of individuals within the population that are located near each other. Cluster Sampling selects a sample by randomly choosing clusters including each member of the selected clusters in the sample. This method is resourceful when the clusters look like the population but one a smaller scale. It saves time and money.

*For cluster sampling, you want each cluster to represent a portion of the population.

*For all methods, use chance to determine labels and groups to eliminate bias.

Being able to identify which method to use depends on what the question is asking. Identify the population and variables to figure out how large of a difference there is between the sample. Make your decision based on that information.