What is a Scatterplot?❓ 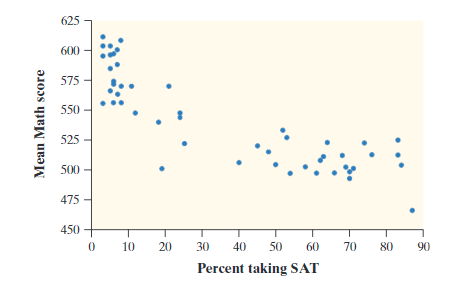 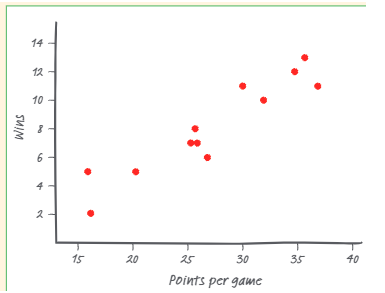 The form of a scatterplot is the general shape given by the scatterplot. This is usually either linear or curved. In the scatterplot above, Graph 1 is best described as curved, while Graph 2 is obviously linear.

The strength of a scatterplot describes how closely the points fit a certain model, and it can either be strong, moderate, or weak. How we figure this out numerically will be on the next section about correlation and the correlation coefficient. For this, Graph 1 shows a medium strength correlation while Graph 2 shows a strong strength correlation.

Lastly, we have to discuss unusual features on a scatterplot. The two types you should know are clusters and outliers, which are similar to their single-variable counterparts.

Clusters are where points are clumped together on a scatterplot. Graph 1 has two clusters, one on the top left and the other on the top right. On the other hand, Graph 2 is more uniformly distributed.

Describe the scatterplot in context of the problem. 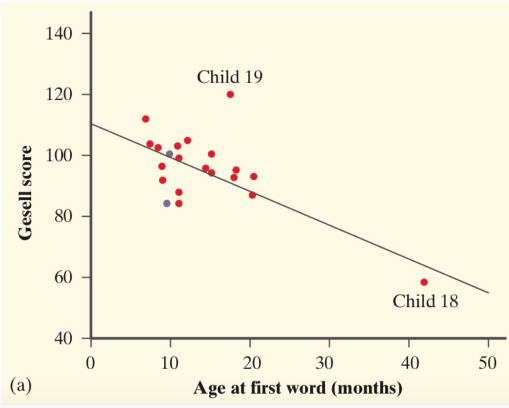 In the scatterplot above, we see that it appears to follow a linear pattern. It also shows a negative correlation since the Gesell score seems to decrease as the age at first word increases. The correlation appears to be moderate, since there are some points that follow the pattern exactly, while others seem to break apart from the pattern. The data appears to have one cluster with an outlier at Child 19, because the predicted Gesell Score for Child 19 (value at line) has a large discrepancy from the actual Gesell score (value at point). Also, the data has an influential point that is a high leverage point with Child 18 because it heavily influences the negative correlation of the data set.

**Notice that this response is IN CONTEXT of the problem. This is a great way to maximize your credit on the AP Statistics exam.