6.4 Setting Up a Test for a Population Proportion 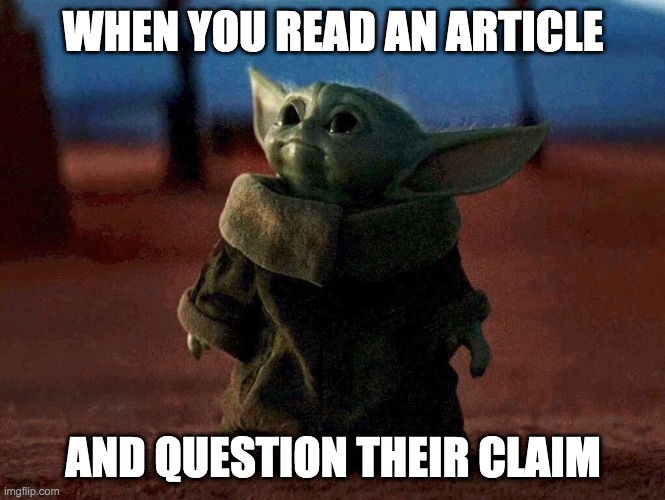 When it has been identified that we need to perform a one-proportion z-test for a population proportion, the first step we need to do is write out our hypotheses. We have two hypotheses to write: our null hypothesis and our alternate hypothesis.

An article recently published in Real News Online! states that 94% of all people can identify the pop culture icon, Baby Yoda. To test this claim, we poll a random sample of 750 people and find that 700 of them can correctly identify Baby Yoda. Do the data given significant evidence that the actual proportion of people who can identify Baby Yoda is more than 94%?

For this question, we are clearly testing a population claim using the sample that we have collected. This calls for a one sample z test for population proportion (or 1-Prop Z Test). Our first step is to write our hypotheses:

As with any hypothesis test or confidence interval, we must have a random sample to perform our test. If we do not have a random sample, we can not infer anything about the population because our sample might be biased. There is no way to fix sampling bias using mathematical calculations. If our sample is biased, the whole study might as well be thrown out. 🙁

Since we are sampling without replacement, we need to make sure that our population is large enough that our experimental units is not really affecting each other after they are selected. To be sure of this, we can use the 10% condition, which states that the population should be at least 10 times the size of the sample. To show this, we can state: "Since it is reasonable to believe that our population is at least 10n, we can assume our sample is independent.

Since we will be using the normal curve to calculate the probability of obtaining our sample, we must first prove that the sampling distribution is normal. For proportions, we will use the Large Counts Condition, which states the expected numbers of successes and failures is at least 10.

In our example above, we would check the three conditions like this:

For actually calculating the values associated with our test, we have to calculate our critical value and from that, we can calculate our p-value.

The z-score for our data is based on the standard normal curve for our sampling distribution. In other words, we are going to see where our sample falls in the range of all possible samples of size n.

Our standard deviation is calculated just like that of a sampling distribution:

For the example above, we would use our z-score of -0.769 and find the probability of receiving that (or something lower). One way to do this is to use a calculator with the normalcdf function.

Calculating our p-value with this z-score would look like this:

If this sounds like a lot of work for one problem, you're in luck!! 🍀

Our graphing calculator will do all of this for us! We just need to go to the Stats Tests Menu and select 1-Prop Z-Test. From there, we simply enter in our parameters and our calculator will give us a z-score and p-value automatically! 👏👏👏

Get your ap stats survival pack!

Download our ap stats survival pack and get access to every resource you need to get a 5.