Lets look back at the two-way table from Unit 2.2. 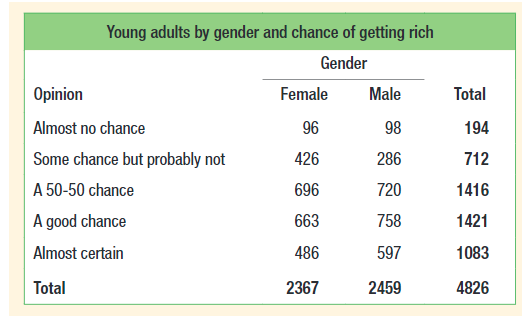 On the other hand, the conditional relative frequency is the frequency that we have of a particular category given the fact that we know a subject is in another category. The category that we know is called the given, or independent category, while the other is called the dependent category, just like independent and dependent variables on graphs. For example, the conditional frequency for “50-50 chance given male” is 720/2459 because out of the 2459 males who responded, 720 of them said “50-50 chance.” When calculating a conditional relative frequency, our denominator (or total) is usually considerably smaller than that of overall total.

Determining Associations from a Two-Way Table