8.1 Introduction to Acids and Bases

Types of Acids and Bases

Thus, HCl yields an H+ ion in water, making it an Arrhenius acid.

Meanwhile, the Brønsted-Lowry definition of acids and bases define acids and bases in the form of a donation reaction. Basically, an acid/base is seen rather as an H+ donator or accepter (the acid donates, the base accepts):

In this example, HA is the acid, which donates an H+ ion to the B- ion (the base) to form HB and A-. Quick tip, get used to seeing HA and B- as sample acids and bases, it's just notation. A and B could be standins for any number of ions that fit in. Quick thinkers may be wondering about the reverse reaction in the case that HA + B- is an equilibrium reaction: 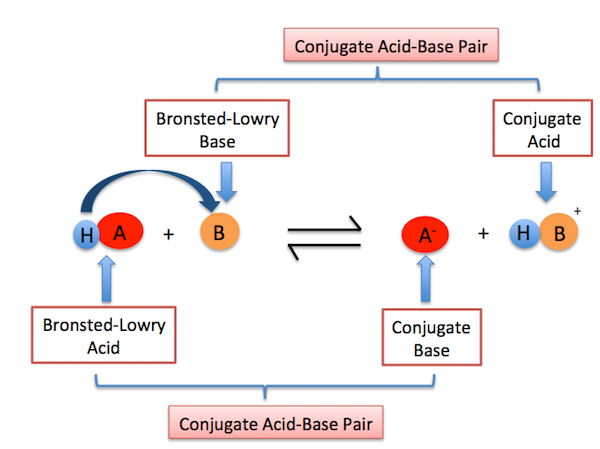 A consequence of Bronsted Acids and Bases is that when an acid dissolves in water, it needs something to donate it's H+ to! In this case, it donates it to water, creating H3O+, or hydronium. Thus, we can see the dissolution of an acid both in an Arrhenius sense as HA <--> H+ + A- and a Bronsted sense as HA + H2O <--> H3O+ + A-. Both of these essentially mean the same thing (and when we learn pH, we'll find that [H+] = [H3O+]), but they display the difference between Arrhenius and Bronsted Acids.