A cool thing about the periodic table is that it is organized to demonstrate different trends and properties of elements. Rather than only understanding the trends, you should be able to explain why they happen.

The atomic radius is the distance between an atom's nucleus and its valence electrons.

Across a Period - Smaller

Going from left to right on the periodic table, the atomic radii get smaller. As you go right, the atomic numbers increase. This means that there is a higher nuclear charge which increases the pull the nucleus has on the electrons. The closer the electrons are to the nucleus, the smaller the distance.

This trend can also be explained by the fact that all elements in a period have the same number of shells. For example, both Li and F have 2 shells.

Down a Group - Larger 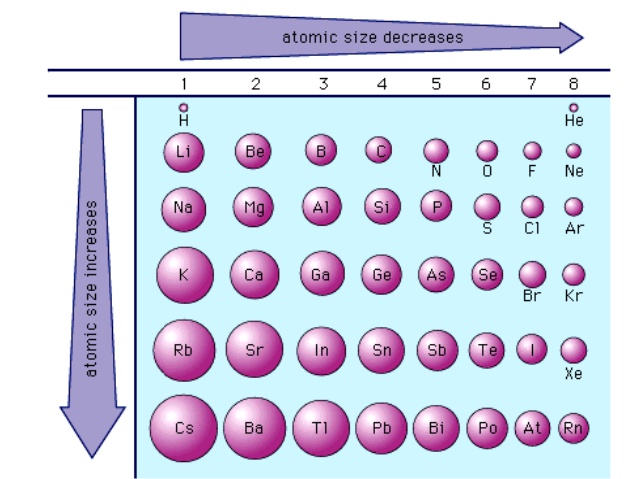 The ionic radius is the distance between the nucleus of an ion and the valence electrons of that said ion. 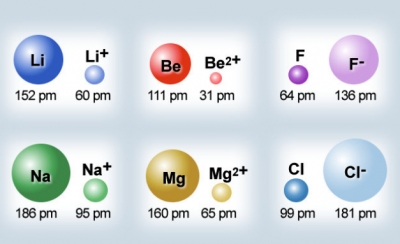 Electronegativity refers to how strong a nucleus attracts electrons of another atom.

Across a Period - Increases

This is true as atoms closer to noble gases require less electrons to fill their outer shell, thus making them more electronegative as they need less energy to attract other atoms.

Down a Group - Decreases

As you go down a group, the atomic size increases. Therefore, the nucleus of one atom is farther away from the electrons of another atom, and the attraction is weaker.

💡Tip - Fluorine is most electronegative element on the periodic table, with the value of 4.0. Just remember that and this trend should be easy to keep in mind.

Across a Period - Increases

Since size decreases, the nucleus and the electrons are more closely attracted to each other. This makes it harder to remove a valence electron and it takes more energy to do so.

Down a Group - Decreases

As you go down a group, the amount of occupied electron shells increases. The valence electrons that are farther away are more loosely attracted to the nucleus. Therefore, it takes less energy to remove them.

When you are given this type of question, just look for the huge jump in ionization energies. This gap occurs because of how much more energy it takes to remove core electrons from an atom. 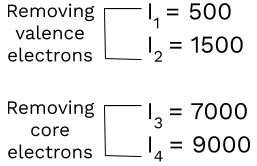 Therefore, this element has 2 valence electrons!

Electron Affinity is the energy change when an electron is added to an atom.

Across a Period - more negative

Down a Group - more positive

The more negative the energy, the more energy is released!

There isn't much you have to memorize here, but Cl has the highest magnitude of electron affinity. F is too small and the electrons are so close together that they would repel, which takes energy. 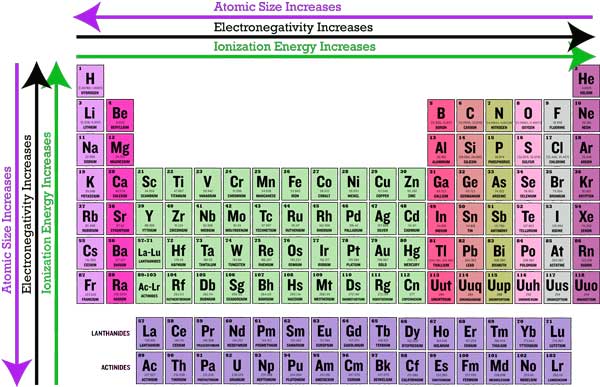