Imagine an atom. Well, most likely you can't even begin to grasp how small an atom even is⚛️. How do scientists then perform laboratory work when it is nearly impossible to count the atoms they are working with🤔? This is where the concept of a mole emerged from. A mole relates the mass of an element to the number of particles there are. Let's begin with the molar mass.

The molar mass of a substance is the amount of grams there are in a mole (the units for molar mass are grams/mole). Finding the molar mass of an element or compound is not as hard as it might seem: the only things that you need to know are which elements are involved and how many of them are present. Also, there's one huge important thing that you'll need: a periodic table! 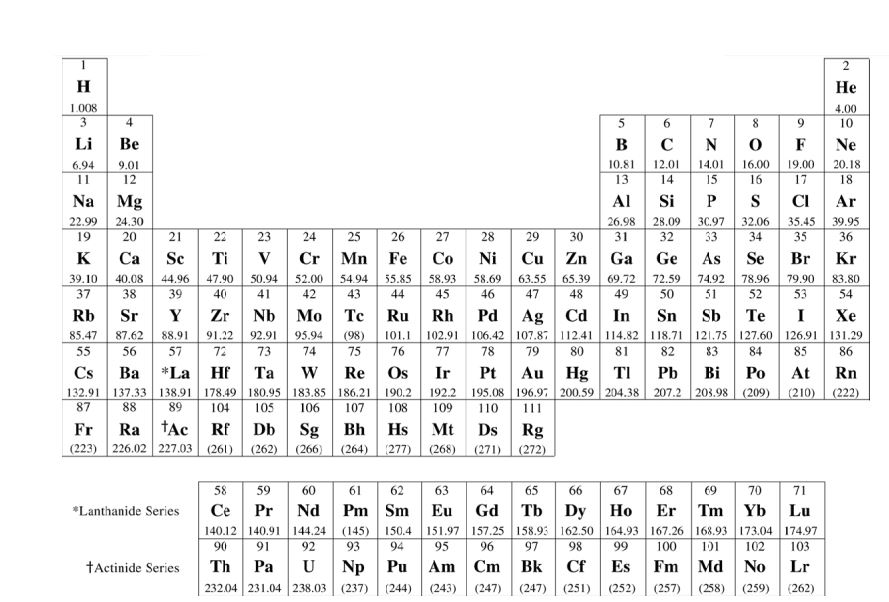 Reference table you will have with you during the AP

For example, let’s say that we have the compound CO2. To calculate the molar mass, you simply have to multiply the atomic mass of each specific element by it’s subscript, and then add it all together. Simple, right?

One of the most fundamental takeaways from this unit is dimensional analysis! What this means is that you can change the units that a number is represented in. For instance, you can convert from miles per hour to meters per second. We can apply the concept of moles and perform dimensional analysis with Avogadro's number. Avogadro’s principle tells us that 1 mole is equal to 6.022x10^23 atoms of a pure substance. This will be important to know when converting from grams to moles to atoms.

Now that we have learned the basics, let’s try converting a sample of 50.0 grams of CO2 between units.

CO2 - Converting from Grams to Moles

When doing dimensional analysis, you want to put the number that you know first, which in this case, is 50.0 grams of CO2. Then, you want to multiply 50.0 by the molar mass in order to convert to the moles of CO2. The unit that you have (grams CO2) should always be on the bottom of the next ratio in order for the units to cancel out. Here, the grams of CO2 cancel out and you are left with a measurement in moles.

💡Tip: It is good to memorize that moles = grams/molar mass. The conversion step in this problem is actually using this concept since you are ultimately dividing the number of grams you have by the molar mass to get the number of moles.

CO2 - Converting from Moles to Atoms

CO2 - Finding the number of atoms of C

CO2 - Finding the number of atoms of O

Unlike carbon, oxygen has a subscript of 2. This makes the ratio of CO2 atoms to oxygen atoms 1:2. Therefore, we have to use dimensional analysis:

Since there are two atoms of O in one atom of CO2, we had to multiply by 2 to get the number of atoms of O.

You got this! Once you practice multiple problems involving dimensional analysis, it'll seem like a piece of cake. Sadly, these problems become more difficult as the course progresses but as always, practice makes perfect.