When dealing with chemical reactions, it is important to understand that, at least for the case of AP Chemistry, the vast majority of them will be taking place in an aqueous solution, that is, dissolved in water💧. Therefore, we will not be dealing with molecules, but rather their constituent particles that are created when they dissolve.

In other words, ionic compounds dissociate into their ions when dissolved in water.

We can write out this dissolving of salt as: NaCl (aq) --> Na+ (aq) + Cl- (aq). Thus, if we have a reaction between two compounds in water, it will be the ions/parts of the molecules that dissolve that react together.

Let's look at a specific class of such reaction:

Sometimes, when two reactants react, one of the products is insoluble. To be insoluble means that it will NOT be ripped apart by water like NaCl would be.

One example of this is the precipitation of lead (ii) iodide:

Because lead (ii) iodide is not soluble in water (we've went over solubility rules in earlier guides [link above]), it precipitates and falls out of solution.

Here is another table of solubility rules: 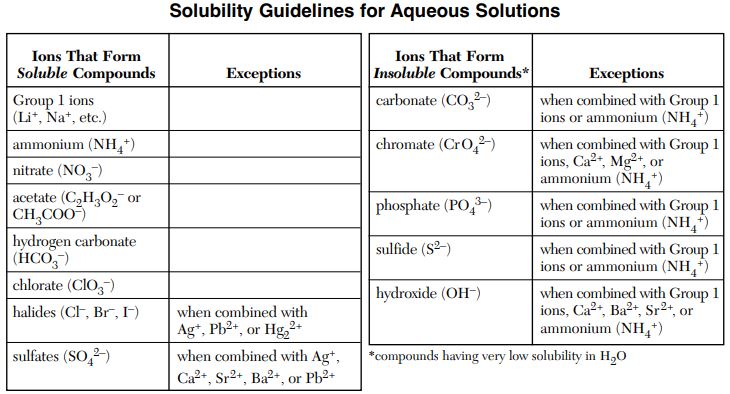 When we're dealing with reactions in aqueous solution, we only care about some of the ions reacting. Others are called spectator ions, and are essentially just there for the ride. They react, but they don't actually take true part in the reaction. Let's see this in action with our previous reaction: 2KI (aq) + Pb(NO3)2 (aq) --> 2KNO3 (aq) + PbI2 (s)

If we write this reaction out with all of the ions, we get:

💡Note that PbI2 does NOT dissociate, since it is insoluble. Be on the lookout for this! Only dissociate soluble compounds. Also, don't dissociate weak acids and bases🍊 (you'll go over this more in the future).

We see through this that potassium and nitrate go in and come out the same way, so we can cross them out and cancel them. Potassium and Nitrate were the spectator ions👓! This leaves us with:

This is called the net ionic equation for the reaction, and tells us what really happens. Potassium and nitrate took place, but they really didn't do much for us in terms of reaction. They could have been any suitable ion and it would happen the same.

💡Remember when writing net ionics that coefficients (the numbers before each reactant) are distributed between ions.

To memorize, here are the general steps to writing a net ionic equation:

Try writing the net ionic equation for the following reaction: