Intermolecular Forces, IMFs, are attractions between entire molecules due to charge differences➕➖. (They typically tend to only affect the solid and liquid phases). Not only are IMFs weaker than bonds-attractive forces due to simultaneous attraction for electrons that exist between 2 nuclei- but they also depend on the type of particle in a sample of matter⚛️.

London Dispersion Forces (LDFs) are the weakest type of IMFs and occur in all molecular samples.

They are the only types of forces to exist between two non-polar molecules and noble gases (solid or liquid form).

💡On the AP Exam, if you are asked to list the types of IMFs being seen in a certain molecule, london dispersion forces will always be an answer. They can easily be forgotten so make sure they always show up in your answer (along with any other forces present)!

At any given time, one nonpolar molecule might have more electrons on one side than another side, making it polar. For that instant, the molecule would have a partial negative side and a partial positive side and it becomes a temporary dipole.

That temporary dipole (molecule) then induces a dipole on its neighboring molecule and there are LDF forces between the partial negative side of one molecular and the partial positive side of another molecule.

Here is a quick visual to sum up this idea of an LDF:

🌟Very important piece of information that is usually asked on the exam:

The strength of LDFs increase as the size of a molecule increases. This is because more electrons yield a stronger instantaneous dipole due to a more polarizable electron cloud. Polarizability is the ease at which an electron cloud could be distorted to give a dipole charge distribution.

As you decrease the distance between the two dipoles, you strengthen the attraction and dipole-dipole interaction. Keep in mind, since these involve polar molecules, the element with the higher electronegativity (in this case Cl-) has the partial negative (δ−).

This also means that the more polar the molecules, the greater the dipole-dipole attraction, which also relates to higher melting and boiling points.

The following question is from the 2018 AP Chemistry Examination. All credit to College Board.

The table above gives the molecular structures and boiling points for the compounds CS2 and COS. In terms of the types and relative strengths of all intermolecular forces in each compound, explain why the boiling point of CS2 (l) is higher than that of COS (l).

Keep in mind🧠 that even though LDFs are the weakest forces, when they are strong and there are lots of them, they can overpower dipole-dipole forces. It all depends on the size of the molecule!

Hydrogen bonding is really everyone's favorite! It's the easiest to identify and the strongest, so they really stick in your mind throughout the whole year😊.

Hydrogen bonding (which is NOT a bond) is actually an unusually strong dipole-dipole attraction and only occurs when hydrogen is directly bonded to F, O, or N in a molecule. It occurs between these molecules because of their high electronegativity difference and small sizes, which leads to really really strong attractions.

💡Remember the acronym FON and that it only occurs in polar molecules!

The hydrogen bonded to the F, O or N is partially positively charged and is attracted to the neighboring unshared electrons on the F, O, or N.

Since these attractions are so so strong, the boiling points of molecules with hydrogen bonds are very high!

An example of a molecule that has hydrogen bonding is water (H2O). It is also seen in DNA🧬.

Let's clear a quick misconception before moving on: 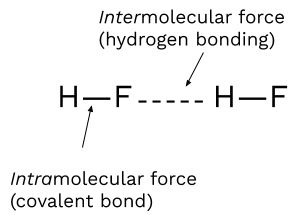 On the AP Exam, you may be asked to draw a molecule with the proper orientation and create hydrogen bonding. Make sure you don't confuse😕 the difference between intermolecular and intramolecular, intermolecular is in between two molecules. Fiveable's here to help! 🎉

Ion-Dipole attractions only occur in a mixture of an ionic compound with polar molecules. These attractions occur when ions are attracted to dipoles (ie: Dissolving NaCl in H2O). Overall, this IMF is stronger than dipole-dipole and H-Bonding. 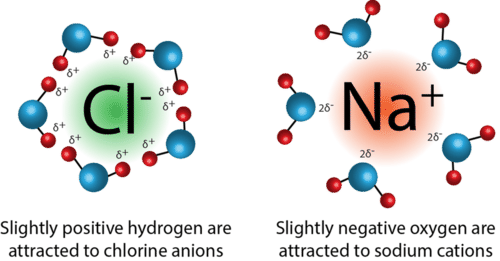 Ion-Ion attractions occur in a sample of ionic compounds. This is the strongest type of attraction because there aren’t partial charges, but instead full charges on the ions. An example of an ion-ion interaction would be NaCl being attracted to other NaCl molecules to form a crystal lattice.

You may be wondering how we can determine the dominant IMF - well it’s quite easy with this simple diagram: 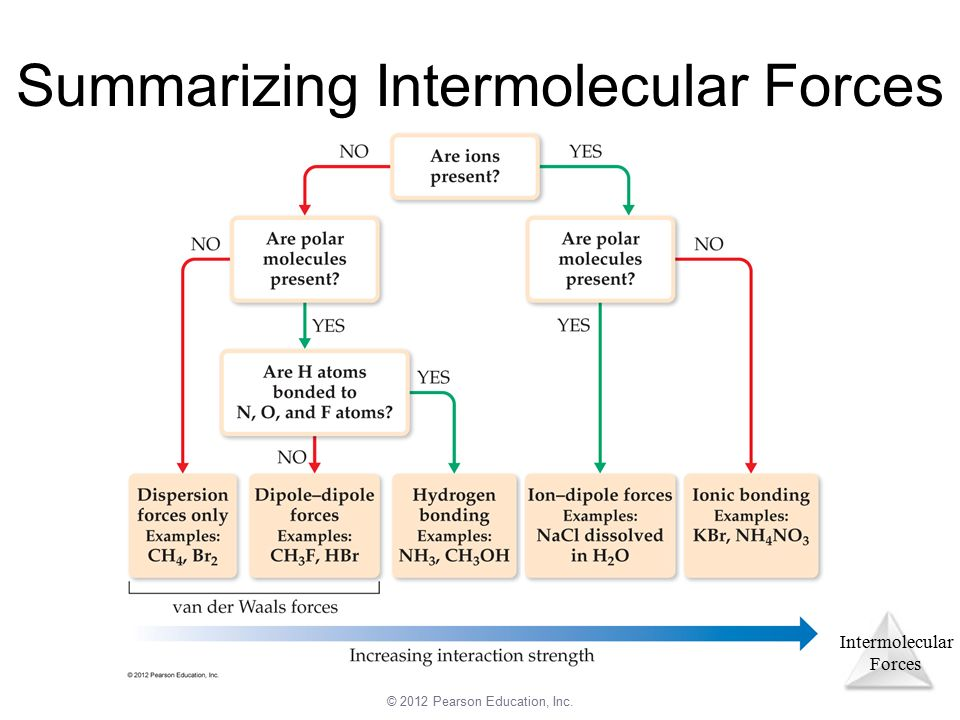