Interactions between solvents and solutes can be represented with particle/molecule diagrams.

Electrolytes are substances that would generate electricity in a solution. This is explained by the presence of ions in the solution.

Strong electrolytes include soluble salts, strong acids, and strong bases. These completely dissociate in a solution of water. To dissociate is to split up into its cations and anions. An example of a strong electrolyte would be HCl and when dissolved, the H+ ions are split apart from the Cl- ions.

To recall (this should be memorized):

Weak electrolytes include weak acids and weak bases. These partly dissociate in a solution of water, so only some molecules would split up into their ions (which explains why they are present as both ions and molecules).

Nonelectrolytes are molecular compounds which don't conduct electricity. An example would be sugar🍬.

The solubility of ionic substances is made possible by solvation. Acids and bases are critical electrolytes as mentioned above. Acids are proton donors; they increase the concentration of H+ (aq); bases are proton acceptors-they increase the concentration of OH- (aq). Knowing the basic properties of these electrolytes can help you recognize compounds that are in certain solutions.

When knowing how different solutions act regarding electrolytes, acids, and bases, you can visualize how particles interact in a solution: 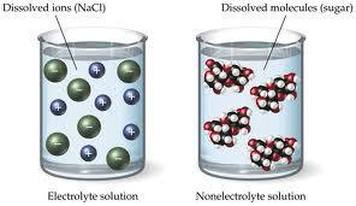 In the above images, you can see two dissolved substances, one being a strong electrolyte and the other being a non-electrolyte. Since the NaCl solution shows dissolved ions, we know that it will conduct electricity.

When discussing solutions, colligative properties are properties that depend upon the concentration of solute molecules or ions, but not upon the identity of the solute. For example, a solution of 6M NaCl will act a lot differently than simply pure water.

There are 3 main colligative properties (You may learn 4, including osmotic pressure, but it will not be directly tested on the AP Exam):

When a solute is dissolved in a solvent, you decrease the tendency for water molecules💧 to evaporate into the gas phase♨️. This means that there will be less gas above the surface of the liquid, leading to a lower vapor pressure.

There is a formula for finding the exact new vapor pressure.

Raoult's Law - P1 = XP0, where P1 is the new vapor pressure, X is the mole fraction of the solute, and P0 is the initial vapor pressure. 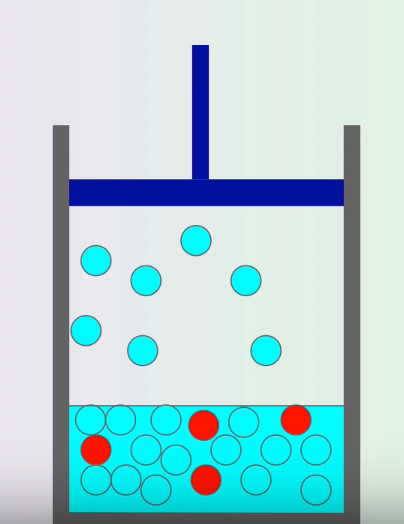 A good example of this is when you make pasta🍝. Chefs around the world always recommend that you salt your water before you add pasta🧂, and while this of course is to add flavor, it also actually raises the boiling point of your water, making your pasta cook quicker!

This same principle is seen in chemistry with solutions. There is another formula to calculate the exact elevation.

ΔTb = km, where ΔTb is the change in boiling point, k is a specific constant, and m is the molality of the solute (molality is a measure of concentration that is mol solute/kg solvent).

The same applies for freezing-points of solutions. As boiling point elevates, freezing point depresses, or lowers.

A good example of this is if you live in the North, you are well accustomed to adding salt to ice in order to melt it❄️. The key reason for this is not a reaction occuring, but actually the freezing-point of the ice decreasing, turning it into a liquid.

💡Fun fact, ice melting salt is actually not NaCl! It's typically CaCl2 since it will split into more solute particles, thus decreasing the freezing-point even more! NaCl splits up into two ions whereas CaCl2 splits p into 3 ions.

The formula for freezing-point depression is very similar to boiling-point elevation; it is ΔTf = -km. 🎥Watch: AP Chemistry - Representations of Solutions