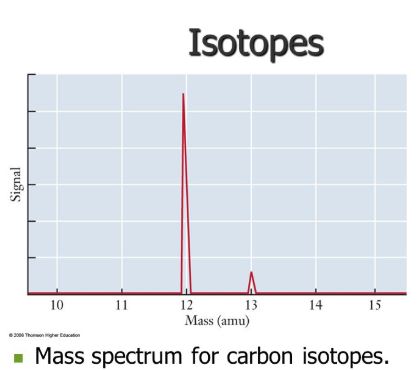 Let's take a look at Carbon on the Periodic Table: 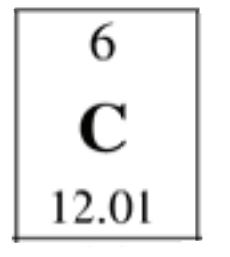 Here, you might notice that instead of a nice "12" or "13" under Carbon, there's a really messy decimal of 12.01. Similarly, oxygen will most likely be 15.999 and even hydrogen will be 1.001. This is because the atomic masses that you're given on a periodic table are the average atomic masses of these elements. This can be described as a weighted average of the abundance of each isotope.

So how did the different number of neutrons eventually lead to an average atomic mass of 12.01? Let's look at this. Carbon's 2 main isotopes, Carbon-12 and Carbon-13, account for roughly 100% of the Carbon in nature. There is a tiny sliver of Carbon-14, but these are so small that it's somewhere in the thousandths of a percent. Let's suppose a chemist finds that 98.9% of all carbon in nature is carbon-12, and thus the other 1.1% is carbon-13. To calculate the average atomic mass of carbon from this data:

Let's see what would happen if we changed the numbers. Let's say now the chemist finds that only 75% of the carbon in nature was carbon-12 and 25% was carbon-13. Now, the AAM is:

As you can see, the abundance of isotopes can have a significant effect on the average atomic mass of an element. If you are only given the mass numbers of 12 and 13, as well as the average atomic mass, you can easily tell which isotope exists in greater amounts in nature. Since 12.01 is much closer to 12 than 13 is, Carbon-12 is clearly more abundant.

💡Always convert the % to a decimal when calculating the average atomic mass.

It is also good to know how to identify an element just from its mass spectrum. Let's try with this example:

The peaks below show a mass spectrum of element X. What is element X based on this spectrum? What is its average atomic mass?

Without a calculator, you can easily tell that the average atomic mass is going to be somewhere between 24 and 25 since X-24 has the greatest % natural abundance. However, let's do some work! Here is what you should do for this problem:

When looking at the periodic table, we can identify this element as Magnesium.

Part a of question 2 on the AP Chemistry 2007 Exam (Form B) includes basic stoichiometry and advanced mass spectrum calculations. Here it is:

Don't worry! As long as you remember the basic formula, you can solve this problem:

Now, just plug in what you know!

One crucial piece of information that you have to remember for this question is that the percent abundances add up to 100%. This allows us to have x as one natural abundance and 1-x as the other, like you have probably done in previous algebra classes. Therefore, the setup for this problem is:

Mass Spectroscopy as a Laboratory Procedure

Mass Spectroscopy is more of a lesson that is geared towards the laboratory aspect of Chemistry🧪, but nonetheless, here’s an excellent lesson on Khan Academy which reviews mass spectroscopy: